Born Free is saddened and appalled to learn that the country’s biggest ‘tusker’ elephant has been killed by a trophy hunter in Botswana, where a hunting ban has been recently lifted.

The trophy hunter, named Leon Kachelhoffer, reportedly paid $50,000 to shoot the endangered elephant who was in his early 50s. ‘Big tuskers’ are so-called because of their large size and huge tusks which can weigh 100 pounds (45kg) each, but research shows that these large-tusked elephants, prime targets for both poachers and trophy hunters, are in serious decline.

Debbie Peake, the director of a trophy export business based in Botswana, attempted to defend Kachelhoffer’s actions by claiming that the hunt “will make a huge difference to a community”. Trophy hunters often try to justify their activities by painting themselves as conservationists and contributors of benefits to local communities, yet the reality is that their ignorant, egotistical actions disempower local communities and seldom produce any significant, measurable financial benefits for them, due, in part, to a lack of revenue sharing by hunting companies. The trophy hunting revenues reported by pro-hunting groups have been found to be inaccurate and inflated. 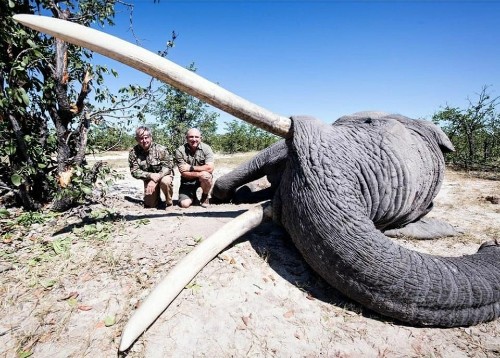 Peake also attempted to justify the shooting of ‘big tuskers’ by claiming that when their tusks have reached 100 pounds, they have already mated any number of times and, therefore, they have already contributed their genes to the population. However, she fails to acknowledge that bull elephants mate more frequently as they get older and the important role older bulls play in elephant societies.

The simple fact is that elephants and other wild animals are worth more alive than dead, a sentiment echoed by Botswana’s former President, Ian Khama, who wrote on Facebook, next to an image of the killed elephant: “How does it being dead benefit our declining tourism due to poor policies. Our tourism is wildlife based. No wildlife means no tourism, no tourists no jobs, and no revenue stream. Incompetence and poor leadership have almost wiped out the rhino population, and now this!”

In addition to tourism benefits, elephants are a vital keystone species whose activities shape their environment and benefit thousands of other species. Recent studies have also estimated that the average carbon sequestration value for each individual African forest elephant over their lifetime is upwards of $1.75million (based on the price of carbon in 2019, which has almost tripled since). It is thought that the larger African savanna elephants, which are found in Botswana, also significantly contribute to natural carbon capture. There are ongoing efforts to establish how this intrinsic value could benefit local communities in the future, through the use of carbon markets.

Responding to the news, Born Free’s co-founder and Executive President Will Travers OBE said: “The killing of this magnificent elephant, one of the few remaining big tuskers across Africa, will have repercussions that go far beyond his own demise. It also risks disrupting remaining elephant groups and populations, potentially bringing them into greater conflict with people, the very issue hunting proponents so often claim their activities help to mitigate. If any of the money generated by the hunt goes back to the local community, it will have at best, only a marginal and short-lived impact and do little to restore the coffers of beleaguered wildlife law-enforcement agencies. It’s time we moved beyond trophy hunting, and realised the true value of protecting what remains of our precious wildlife and invested in its true conservation.” Born Free urges the government to make good on their promise to ban trophy hunting imports to the UK.

More information on trophy hunting and our petition can be found here.