BO AND BELLA HAVE ARRIVED!

Bo and Bella – the two chimpanzees rescued from hunters in Guinea-Bissau – have safely arrived at their new home, Sweetwaters Chimpanzee Sanctuary at the Ol Pejeta Conservancy in Kenya, with help from Born Free.

The young chimps had a traumatic start to life. Like countless other primates in West Africa, they were destined for the illegal pet trade after their families were killed for bushmeat. The pet trade is lucrative in Guinea-Bissau; in a country where most people live on less than 2 euros a day, a single chimp can fetch up to 200 euros. These ‘pet’ primates are usually kept in terrible conditions, chained up or locked in tiny cages.

Bella was seized in 2016 from a hunter who had kept her tied by the neck to a tree, starving and deprived of any social interaction. Bo, a young female, was kept in a cage near an ice factory. Local people queuing for ice liked Bo and enjoyed interacting with her, but her health suffered as she was given candies, bananas and other fruits, and occasionally alcohol and cigarettes.

Both chimps were rescued and taken to Bissau, where they stayed in permanent cages until their departure to Sweetwaters. Prisoners from the town of Bafatá, who are themselves living in deplorable conditions, built these cages as part of a project by the NGO Mani Tese to facilitate working opportunities so prisoners can pay for food and healthcare. “I think this is very symbolic, prisoners and chimps living in very poor conditions in Guinea-Bissau,” says researcher Maria Joana Da Silva, “the prisoners receiving money for building cages for chimps, who remain there temporarily while waiting for their freedom in a foreign sanctuary.”

Upon arriving at Bissau, it took Bella three days of observing Bo to realise that she could move and climb up and down the cage, and she was soon exuberantly jumping, turning, and voraciously requesting food. She was once screaming for food when Bo – understanding what she wanted – threw some peanuts at her.

After a two-year effort of the Project to End Great Ape Slavery and Maria Joana Da Silva, and with the support of Born Free, the chimps were finally able to be relocated to Sweetwaters Chimpanzee Sanctuary. Bo and Bella touched down safely in Nairobi at 6:30am on April 26th, having eaten their fill of mangoes and bananas on the journey over. According to staff at Sweetwaters, Bella continues to ‘eat like there is no tomorrow.’

Following a ninety-day quarantine, Bo and Bella will be released into the 250-acre natural enclosures. The sanctuary is home to 36 other rescued chimpanzees, including two older females – Akeela and Jane – who are known to be excellent guardians for new arrivals. Delighted with the two newcomers, Ol Pejeta said “we are confident that this will be the beginning of a much happier life for them both.” 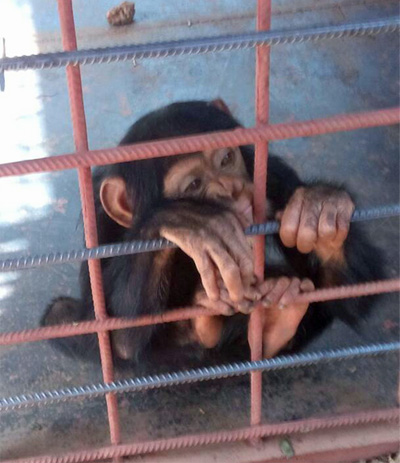 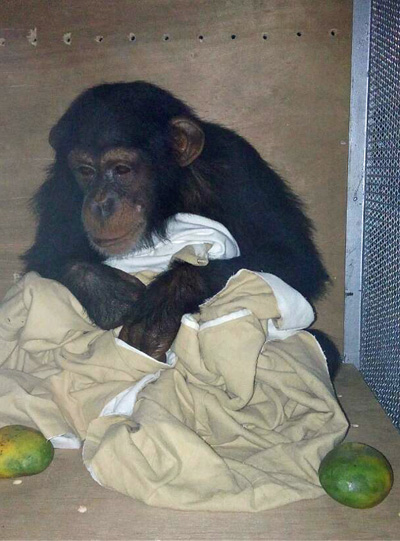