Its statement reflects widespread international and scientific condemnation of commercial predator breeding operations for hunting purposes, most of which are located in South Africa.

Born Free is opposed to the killing of any animal for sport or pleasure, and rejects claims by Dallas Safari Club and other hunting organisations that trophy hunting delivers significant conservation or community benefits.

However, the ‘hunting’ of captive-bred lions and other predators in enclosures, dubbed ‘canned hunting’, is a particularly abhorrent practice which has even divided opinion among hunting proponents.

The captive predator breeding industry has grown rapidly across parts of South Africa in recent years, with 8,000 or more lions and other predators currently languishing in at least 200 facilities. The conditions in which the animals are kept are often extremely poor. 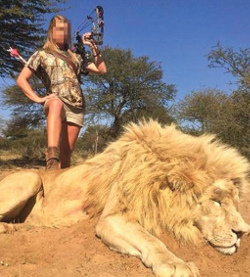 Born Free’s co-founder and president Will Travers OBE said: “South Africa’s captive-bred lions are cynically exploited for profit at every stage of their lives. Young cubs are removed at a very early age so they can be hand reared by unwitting paying volunteers, often from Europe, North America or Australia, and so their mothers can be repeatedly bred from. The cubs are exploited for tourism opportunities such as ‘petting’ and, as they grow, ‘walking with lions’. As they mature, many are moved into hunting enclosures to be shot by paying ‘hunters’ with no chance of escape, and their bones are exported to the Far East to supply the traditional medicine and tonic trade.”

The Professional Hunters Association of South Africa, under huge pressure from the powerful predator breeders, issued a statement in support of canned hunting in December 2017, bringing international condemnation and causing the organisation to fragment. A new organisation, naming itself the ‘Custodians of Professional Hunting and Conservation South Africa’, was created to accommodate the increasing number of hunters and hunting outfitters in South Africa who oppose canned hunting.

Travers continued: “South Africa must be persuaded to heed the international criticism that is doing so much harm to ‘brand South Africa’, and close down this heinous industry without further delay. All countries that allow trophy hunting should recognise that wildlife is worth far more alive than dead, and that the myth of ‘killing animals to save them’ has been exposed for the sham it truly is.”