Born Free has welcomed the news that the world’s first open water beluga sanctuary will open in Iceland in March 2019.

The sanctuary will be home to two 12-year-old beluga whales currently held at Changfeng Ocean World in Shanghai where they perform for visitors. The sanctuary has been in development for six years by The Sea Life Trust and Whale & Dolphin Conservation charities.

Chris Draper, Born Free's Head of Animal Welfare & Captivity, said: “Born Free welcomes initiatives that move away from traditional captivity for cetaceans and towards keeping animals who cannot be released to the wild in significantly more appropriate environments. An end to the exploitation of cetaceans in captivity is long overdue and we will need developments such as this and others such as the Whale Sanctuary Project in North America in order to care for the cetaceans that the captive industry has made non-releasable.” 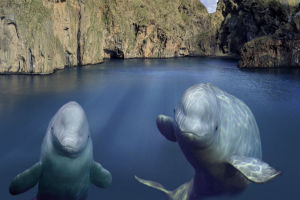