On the 14th August the new provincial Government of British Columbia announced a ban on the trophy hunting of grizzly bear, along with all hunting within the Great Bear Rainforest, from 30th November 2017.

There are thought to be around 15,000 grizzlies left in BC but each year an estimated 250 individuals (mothers, fathers, siblings) are being hunted for their meat and as trophies. Doug Donaldson, BC’s Minister of Forests, Lands, Natural Resource Operations and Rural Development, commented that grizzly bear trophy hunting was “not a socially acceptable practice in 2017” and encouraged wilderness operators to look instead to the economics of bear viewing.

Born Free welcomes the announced ban, which also prohibits the possession of paws, heads, and skins by meat hunters. However, we urge the provincial Government to go further and introduce  a complete ban on bear hunting, and for other Canadian provinces that allow bear hunting to follow BC’s lead. Currently  the proportion of trophy verses meat hunts is not understood, and therefore it is difficult to gauge the true impact a trophy ban will have on the local population. 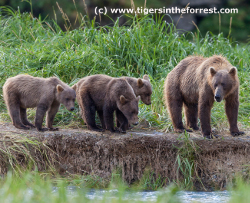