Our colleagues at Orphan Bear Rescue Centre in Russia have just rescued three bear brothers – their first cubs taken in this year – and you can help look after them!

Father and son Sergey and Vasilyi Pazhetnov – part of a pioneering family of biologists who run the centre – made the gruelling 900-mile journey by car to the Kirov region to collect the triplets, after their mother was scared from their den by nearby logging. Just six weeks’ old and weighing around 2kg, Bantik, Tisha and Ostap were temporarily taken in by the Kirov Regional Centre for Animal Protection and named after the vets there.

The three cubs slept for most of their long, snowy road-trip back to the Born Free-supported Orphan Bear Rescue Centre, nestled in dense forest 280 miles north west of Moscow. The youngsters need round the clock care but, fortunately, the team are experts at caring for even the most fragile orphans. The trio have to be encouraged to drink their nourishing bottles of milk replacement formula enhanced with vitamins but, used to suckling from their mother, this isn’t unusual.

With eyes already opened, the brothers are small, but feisty and noisy. Just taking their first steps, the signs so far are positive, although it’s early days. This is just the beginning of an incredible journey as the three are gradually prepared for life back in the wild. Last year, Born Free helped OBRC successfully rescue, rehabilitate and release an incredible 17 bear cubs with one cub, Puzha, overwintered at the centre and due to go wild shortly.

We will report back soon on Bantik, Tisha and Ostap’s progress.

Adopting The Brown Bear Orphans will help OBRC continue to rescue, rehabilitate and release orphaned brown bears back into the wild, where they belong. 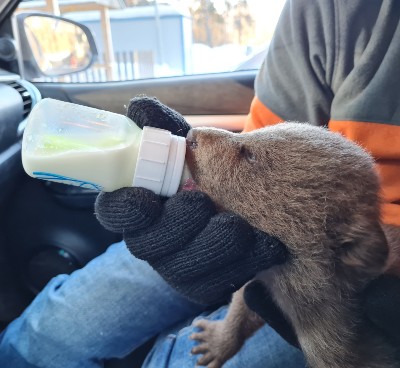 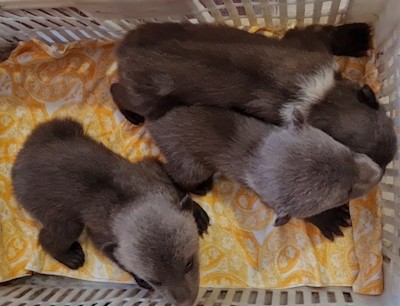