News has emerged that the long-running, US-based Ringling Bros And Barnum & Bailey Circus has reportedly made the decision to cease operating.

The company made the announcement on 14 January 2017 that it will be holding its final performance on the 21 May, due to declining sales.

“This is an extremely clear indication that people no longer find circuses using animals to be acceptable, and is an important step forward for the welfare of animals in circuses everywhere. But I do not believe that it spells an end to the exploitation of wild animals in circuses in the USA.

However, from the UK perspective, one thing is clear: we cannot simply wait for circuses to cease operating in order to achieve an end to their use of wild animals. We need definitive and decisive legislative action across the UK to send a message once and for all that the use of wild animals in travelling circuses is unacceptable, rather than relying on market forces to close circuses.”

In 2015, the Ringling Bros. And Barnum & Bailey Circus announced its intention to cease travelling with elephants, although it planned to continue touring with animals such as lions, tigers, and kangaroos. The cessation of operations raises questions over the future of the animals currently kept and used by the Circus, and the Born Free Foundation stands ready to work with the circus management, our NGO colleagues and the relevant authorities to secure optimum lifetime care for these animals.

The Born Free Foundation and its numerous NGO partners have been working to secure a ban on the use of wild animals in travelling circuses throughout the UK. While progress towards a ban has been positive, it has also been excruciatingly slow, with the Government in Westminster repeatedly citing the need for Parliamentary time in order to introduce legislation to ban in England.

“The lack of Government action on this issue means that the UK is lagging behind many other countries that have already introduced bans on wild animals in circuses. The message is simple: the public and Parliamentarians in the UK want a ban – let’s get it in place without further delay”. 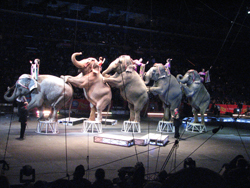