Almost a decade ago I first surveyed Banyang-Mbo Wildlife Sanctuary in Cameroon in order to estimate the number of elephant and chimpanzee. The expedition was memorable for a number of reasons. For one, almost everyone I spoke to assumed that we’d find little evidence of chimpanzees. Primates were scarce they said and commercial hunting rampant, it was doubtful that a large population remained, but despite the bad prognosis, we did confirm the presence of a large population. Other primates were indeed scarce, but for the most part hunters were adhering to traditional taboos that prohibited the killing of chimpanzees.

In contrast, despite having historically been a significant site for elephants, the results of the survey for this species, were worrying. My two Cameroonian colleagues, Felix and Denis, who’d implemented elephant research in previous years, shouted “elephant!” whenever we heard a rustle in the undergrowth but became increasingly despondent over time as we failed to see any. We heard them once at night as we sat around the campfire eating and the team was terrified. Nothing induces fear in a man like a forest elephant.  Over the course of the survey, however, it became only too clear that the population had suffered a severe decline; fourteen were reportedly killed for their ivory over the time we were there but all we could do was document the loss.  We were powerless to stop it. The footprints of baby elephants that we observed were a poignant reminder of the uncertainty in their futures.

In rugged rain forest terrain the only means to get around is by foot. Survival is dependent on self-sufficiency and under one’s own steam everything you should ever need is carried on your back. It was a surprisingly challenging but liberating experience: there is a freedom that comes with always being on the move. At the same time, days spent in the gloom and shade under the canopy generated an altered state: a sense of claustrophobia and upon returning to civilization, an initial fear of wide open places.

The survey identified Banyang-Mbo as an important site for the Nigeria-Cameroon chimpanzee but instead of stimulating additional conservation interest, the impetus to affect change stagnated. Unlike other protected areas in the Southwest Province, Banyang-Mbo does not support the Critically Endangered Cross River gorilla and there are precious little financial resources to safe-guard every protected area worthy of conservation attention. I moved on to other countries and other sites but the enthusiasm I and my Cameroonian colleagues felt for Banyang-Mbo has never wavered and I hoped that if the opportunity arose I might return. That opportunity, to salvage something more meaningful in conservation terms from that experience, eventually came after my appointment to the Born Free Foundation.

But a lot can happen in a decade and I was understandably nervous. I’d never revisited a site before and in West Africa where the bushmeat trade – such an important part of the rural community’s income and diet – is also a primary driver of species extinction and forest degradation, there was a high risk that we’d find nothing left – that we’d only confirm my worst fear – that because we hadn’t implemented something earlier, we’d left it too late. In particular, I anticipated that we would observe few signs of elephants. I strongly doubted that anything but a handful remained.

But returning to Banyang-Mbo, a forest that had been under immense and sustained human pressure, taught me that as much as humans are the cause of species extinction and the solution to species survival, some species – particularly intelligent ones – have a propensity to adapt and persist to a degree without our intervention. Our recent expedition found plenty of evidence that the wildlife was still there, including an encounter with a large and very noisy group of chimpanzees. Most importantly we were able to map the distribution of elephants and chimpanzees. Hunting is a major cause of species loss in West Africa, but habitat destruction accelerates the process. Their persistence lies in part to the fact that Banyang-Mbo is an intact primary rain forest and given the ruggedness of its terrain will never be exploited for its timber.

During this trip, time constraints prevented us from surveying the whole forest. In November, we return to continue the survey and based on these findings will consider longer-term conservation support of the site. 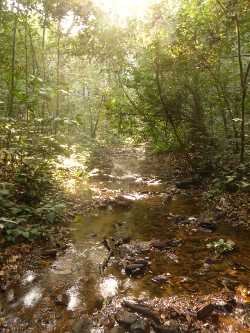