BAN ON THE USE OF BULLHOOKS ON ELEPHANTS IN UK ZOOS

Two of the world’s leading animal protection charities, the Born Free Foundation and The David Sheldrick Wildlife Trust, have joined forces to call for an urgent review of the use of bullhooks (sticks with curved, pointed tips, often known as ‘ankuses’) in elephant handling and ask that standard management practice include the use of protective barriers to ensure the welfare and safety of both keepers and elephants across all UK zoos.

It is thought that four UK zoos still manage their elephants under systems that permit keepers and elephants to share the same space: ZSL Whipsnade Zoo, Colchester Zoo, Woburn Safari Park and West Midlands Safari Park. This management system, generally known as Free Contact, places keepers at risk and traditionally relies on the use of an ankus to control elephants. Free Contact handling is acknowledged to be associated with keeper injury and death.

Furthermore, at least one of these zoos, ZSL Whipsnade Zoo, permits elephants to share space with the visiting public while elephants are walked around the zoo grounds: something that is, in the opinion of the animal protection organisations, wholly unsafe.

Over the past 40 years, the David Sheldrick Wildlife Trust has rescued and successfully hand-reared over 200 orphaned elephants in Kenya with a dedicated team of keepers led by Dame Daphne Sheldrick DBE. Founded in 1984, Born Free Foundation has a long history of investigating and campaigning on matters relating to elephant welfare in captivity. Both organisations have a sound understanding of the physical and emotional requirements of elephants and are deeply concerned that these zoos continue to use ankuses when handling elephants.

Dame Daphne Sheldrick, Founder of the David Sheldrick Wildlife Trust, said: “I am shocked to learn that some UK zoos still use an ankus to enforce obedience through fear on the elephants in their custody, and this despite so much now known about the very human emotional make up of these highly intelligent and by nature, gentle giants. With elephants one reaps what one sows – treat them with respect and kindness and you will be rewarded with the same, but handle them cruelly and they will one day settle the score.”

Virginia McKenna OBE, Co-Founder and Trustee of Born Free Foundation, said: “While I find the idea of keeping sensitive and complex animals such as elephants in captivity in zoos to be abhorrent, I am particularly appalled to discover that several high-profile zoos in this country continue to handle their elephants in a manner that places both keepers and elephants at risk. These zoos are sending a dreadful and inaccurate message to their visitors: that elephants are ours to control. It is high time that zoos everywhere put the welfare of elephants first, and that we end the keeping of elephants in zoos entirely as soon as possible.”

Both organisations are calling for an urgent review of the Secretary of State’s Standards of Modern Zoo Practice, which outline how UK zoos should keep animals, to ask for an end to the use of the ankus and that protected contact through safety barriers be recommended as standard practice across all UK zoos with elephants.

From Tuesday 30th August, The David Sheldrick Wildlife Trust will be launching a BAN THE ANKUS campaign via their campaigning website iworry. Find out how you can help. Take action for elephants at: www.iworry.org.

What is an ankus?
The ankus is a tool used to train and handle elephants. The ankus is frequently referred to as a “guide” or similar, yet this method of handling elephants relies on coercion rather than cooperation and on reinforcement of painful or aversive stimuli. Elephants handled using an ankus will be well aware of the pain that an ankus can inflict, and thus move body parts away from the implement.

Alternative systems employing protected contact, when practiced correctly, ensure the safety and welfare of both keeper and elephant at all times and enable the elephant to leave the area at will, thus eliminating the use of ankuses for control, enhancing willingness to participate in veterinary procedures, and reducing the need for the use of restraint.

Have any other countries reviewed their management systems?
Following a series of incidents involving keepers, the US-based AZA (Association of Zoos and Aquariums) have moved all of its member institutions towards Protected Contact management as a safer and more humane approach; a move that has now been adopted by more than 50% of European zoos. 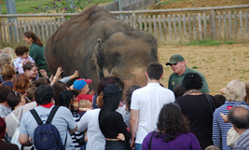 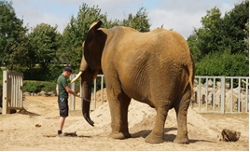