Born Free is leading a campaign to stop trophy hunters bringing lion and elephant trophies into the European Union from Tanzania.

A letter initiated by Born Free, and signed by 22 prominent civil society groups, has been sent to the European Commission and authorities in EU member states, urging them to overturn decisions that allow hunters to import lion trophies, and trophies from elephants derived from certain populations, from the East African country.

Born Free’s Associate Director Mark Jones said: “Tanzania’s elephant and lion populations have suffered devastating declines in recent years. The country has lost 60% of its elephants to poaching between 2009 and 2014, and more than 60% of its lions since 1993. Badly managed and corrupt trophy hunting operations have contributed to these declines. The EU claims that Tanzania is trying to address some of these issues, which is of course good to hear, but it is impossible to be sure that imports of trophies from such depleted and disrupted populations will not be detrimental to the survival of these beleaguered species. The EU must surely take a precautionary approach.”

Born Free is opposed to the killing of any animal for sport or pleasure. The EU, however, assesses whether trophies and other wildlife products from endangered species, the trade in which is regulated by international rules, should be allowed on the basis of sustainability. In the case of species afforded the highest level of protection, such as elephants, the imports should result in ‘significant and tangible conservation benefits’. 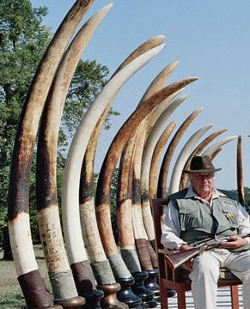 The decision to allow imports of lion and elephant trophies from Tanzania was based on a mission visit to the country by wildlife officials from the UK, Austria and Hungary in 2016. The signatory organisations to the letter have challenged the conclusions of the mission report, which gives undue weight to the opinions of Tanzanian officials and others with a vested interest in trophy hunting revenues, while failing to take account of the overwhelming weight of scientific evidence detailing the devastating population declines, and the lack of transparent governance processes in Tanzania.

The signatories to the letter are urging officials to reconsider their opinions on the import of hunting trophies from Tanzania as a matter of urgency. The Scientific Review Group of wildlife experts from EU member states meets quarterly, and is next due to convene in mid-November.