In December, the Born Free Foundation issued a call to Government to make a commitment to repeal legislation allowing circuses with wild animals to operate in England under licence, and commit to an outright ban. Last night, it was confirmed that our call may have been heeded when it was confirmed that the licensing regime would expire in January 2020, by which time the Government intends for the ban to be in place.

The licensing regime, which has been in place for the last five years, was reviewed in early 2018, with the subsequent report being published yesterday. The report makes the recommendation that the licensing regime be repealed and replaced with the outright ban which was initially promised way back in 2012.  This news is welcomed by the Born Free Foundation and provides the first real commitment from the Westminster Government to a firm timetable for the ban.

Chris Draper, Head of Animal Welfare and Captivity for Born Free said: “This has been a long, long time coming but we are pleased to see the Government heed calls to repeal the ill-advised licensing regime which allows circuses to continue touring in England with wild animals and, finally, put a firm deadline on the introduction of a ban. The circuses are now on notice and we look forward to supporting the Government in taking the final steps necessary to close the door on this outdated and unpopular practice for good”.

Despite being the first country in the UK to state its intention to ban the use of wild animals in circuses, England has subsequently trailed behind Scotland, which has now banned the practice, and Wales, which recently announced its intention to draft legislation to the same effect. It is hoped that Northern Ireland will move to ban when its - currently stalled - Parliamentary processes are re-established. 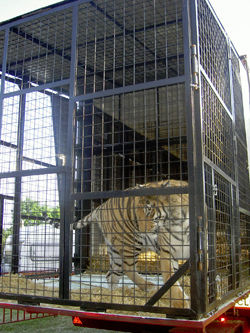