It has been reported that Arturo, the 30 year old polar bear at Mendoza Zoo in Argentina, has died.

Arturo’s sad situation was first brought to international attention back in 2013, when distressing photographs and reports of his situation were circulated around the world. It is thought that Arturo endured substandard conditions in a completely unsuitable and unnatural climate for over 20 years.

In recent months, the Born Free Foundation continued to raise our concerns about Arturo’s quality of life with the Argentine authorities, and we had offered to undertake an audit of Arturo’s welfare and to work with the zoo management and authorities to find a solution for him. Members of the public spoke out for Arturo in their hundreds of thousands, writing letters and signing petitions. A specialist zoo in Canada offered to rehome Arturo to better and more tolerable conditions. Yet Mendoza Zoo appeared to be uninterested. Eventually, the Zoo allowed an ‘independent’ assessment of Arturo by representatives from other zoos to take place in 2015, which deemed him to be in “excellent physical and mental health for his age” and recommended that such an old polar bear should not be moved. Subsequently, he remained at the Zoo with some small improvements made to his enclosure.

Recently, Mendoza Zoo had reportedly been concerned about Arturo’s deteriorating health. We understand that euthanasia was being considered to alleviate his suffering however, in the meantime, Arturo passed away.

While there are considerable threats facing wild polar bear habitat, the Born Free Foundation believes that keeping and breeding more bears in zoos has no genuine role to play in polar bear conservation. Experience of polar bears in zoos the world over has shown us time and again that polar bears simply do not fare well in captivity, particularly in zoos in hot climates. Sadly, polar bears remain commonly kept in zoos in countries such as Mexico and Singapore, and until quite recently, Chile and South Africa.

Born Free will continue to push for change wherever possible, and ensure that scenes of polar bears sweltering in scorching temperatures in substandard zoos become a thing of the past. 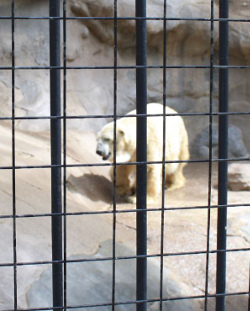