oday marks 50 years to the day since the glittering Royal Film Performance of iconic wildlife film classic Born Free was held in London, with guest of honour Her Majesty the Queen.

Born Free, which starred legendary actress Virginia McKenna OBE and late husband Bill Travers MBE, touched the hearts and minds of millions of people and is, today, enjoyed by new generations of movie-lovers worldwide. The film tells the enchanting and dramatic true story of real-life couple, Joy and George Adamson, who raised Elsa, an orphaned lion cub, to adulthood and successfully released her back into the wild. It inspired Virginia and Bill, along with eldest son Will Travers OBE, to establish the international wildlife charity the Born Free Foundation, 32 years ago, on March 19th.

Virginia said: “There are some anniversaries that I will always remember – like the Royal Film Premiere of Born Free 50 years ago today.  I will never forget when Bill and I were introduced to Her Majesty the Queen and some of the Hollywood stars who were there.  And, of course, Joy Adamson attended as a very special guest.

“Filming Born Free was a life-changing experience. It taught us to understand and respect lions and their nature. We could never have imagined the impact the film would have — not only on our family but also on the many millions who have watched it over the years.”

When it opened at the box office in 1966, Born Free achieved widespread critical acclaim and became one of the most popular films of the year. It was nominated for a Golden Globe for Best Motion Picture, and Virginia McKenna was nominated in the Best Actress category. Composer John Barry won the Academy Award for Best Original Music Score, and won a second Oscar with Don Black for best song ‘Born Free’.

Well-known fans of the film and Patrons of the Born Free Foundation include British icon Joanna Lumley OBE; legendary Queen guitarist Brian May; comedian and actor Martin Clunes OBE; singer and reality star Peter Andre; television presenter Amanda Holden; pop star Mollie King; and Coronation Street actress Helen Worth. Even President Barack Obama, recalling the first time he watched the film has stated: "I think I may have teared up at the end (of Born Free) when they release Elsa. I couldn’t have been more than four or five.”

Will Travers, President of the Born Free Foundation, said: “In recognition of the impact the Born Free story has had on conservation, we have designated 2016 as the 'Year of the Lion' and I hope that with this being the poignant anniversary of this much-loved film, people will again look at what is happening to this most majestic and iconic of wild animals, and pledge their support via social media and particularly Twitter. Let the world Roar For Lions on 14th March!

“The fight for the survival of lions in the wild has never been more urgent. Experts believe their numbers have fallen from an estimated 100,000 50 years ago, to as few as 20,000 today across Africa, as their habitat dwindles and becomes more fragmented; as horrific retaliatory killings are perpetrated; and as hundreds of lions are slaughtered each year by trophy hunters in the name of ‘sport’. The species’ decline has been rapid and steep. We’ve already been successful in securing protection for lions under the U.S. Endangered Species Act, an historic achievement. But without concerted action at all levels of government globally, the species could disappear from significant parts of Africa during our lifetime.

“Lions are in our DNA. It is still within our grasp to reverse this devastating trend, but only if we wake up now and take action.”

Born Free has set up a special Twitter hashtag #YearOfTheLion for those wishing to pledge messages of support for Born Free today, and during this special year.

To find out more about the Born Free Foundation, support its work, and become a member, please go to: www.bornfree.org.uk

Brian May and West End and Broadway songstress Kerry Ellis have re-recorded the Oscar-winning song 'Born Free'. Listen to their version here. 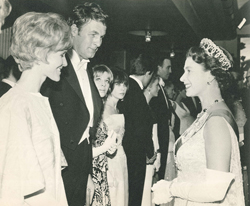 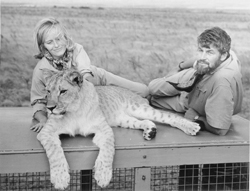