Virginia received the surprise award from animal lover Paul O’Grady and to a standing ovation from the star-studded audience, which included her family. There were also heartfelt video tributes from Born Free Founder Patron, Joanna Lumley OBE, and Born Free Patron, Helen Worth.

Virginia has remained at the forefront of wildlife protection and animal welfare for the past 33 years. With compassion and empathy for all living creatures at the heart of everything she does, Virginia speaks out against individual animal suffering, lobbies governments to change cruel and archaic legislation, and works to create sustainable and safe environments for endangered species.

Earlier in the evening, Ian Redmond received the Next Generation Award. Redmond is a leading light in the world of conservation, starting out more than 40 years ago studying gorillas in Rwanda as the young protégé to the late Dian Fossey. In 1979 he was involved in the legendary footage of Sir David Attenborough's first encounter with a group of gorillas, and in 1988 worked with actress Sigourney Weaver during the making of Hollywood blockbuster Gorillas in the Mist. He has worked with Born Free since 1986.

The Daily Mirror Animal Hero Awards recognise and celebrate the most inspiring examples of bravery, dedication and resilience in the animal world. 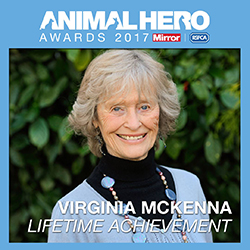 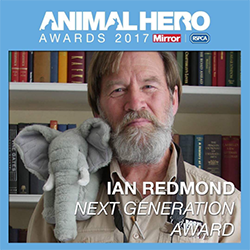