Meru National Park is home to many animals including the olive and yellow baboons. As we undertake our work in this wilderness, we also face the challenge of baboons which have now settled and live within the Park’s staff quarters in Murera.  They are the most widespread primates in Africa as they are highly adapted to the savannah habitat.

The baboons have not spared the neighbouring community living near the Park’s headquarters and headed westwards along the rhino sanctuary fence. These primates raid and destroy the community’s crops, leaving the farming community devastated and destitute, and many times enduring sleepless nights as they have to be awake very early in the mornings to protect their farms.

Baboons are quick and tactical in their attacks.  One weird thing about them is that they do not fear women or children. The baboons attack and rob them at day time as they come from shopping. I have rescued many women and children from these fearless primates.

They have also struck and invaded our house numerous times whenever we inadvertently forget to shut a window, eating food stuff from the kitchen and after their fill, playing with the leftovers and leaving our abode in a total mess. By the time they leave the house, they will have smeared waste all over the floor, furniture and walls with their waste. Not a very welcoming sight on landing home after a long day in the field! 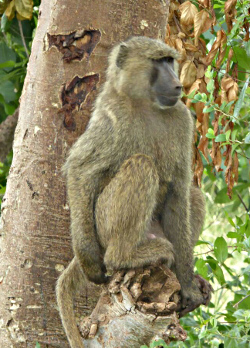 In the latest attack, we were taking our lunch and busy chatting in the sitting area, totally oblivious that the baboons had sneaked into my bedroom through one of the open windows. Besides leaving the room in a mess, they tore up my new mosquito net, a necessity in the Park. It’s a battle of wits with them, and being conscious and cautious on our part.

Despite these challenges, our team has adapted well to these baboons as we live in their habitat.