Attenborough and The Giant Elephant (BBC1 9pm Sunday 10th December) recalls the tortured existence of an animal who was incarcerated in zoos and travelling circuses, and whose miserable life ended following a collision with a train.

Jumbo’s is a cautionary 19th Century tale which reflects a profound misunderstanding about the nature of elephants and which still resonates today as Chris Draper, Associate Director of Animal Welfare and Captivity at the Born Free Foundation, explains:

“Jumbo’s life must have been utterly miserable In the UK but, despite all we have learned in the more than hundred and twenty-five years since his death, captive life for elephants in circuses and zoos is still fraught with dangers, challenges and suffering.

For example, it remains legal to keep and handle elephants in zoos using a system of free contact, where keepers and elephants share the same space. Not only is this system extremely dangerous for keepers, it generally relies on the use of an ankhus or bullhook – a pointed metal hook on a pole - to control the elephants. 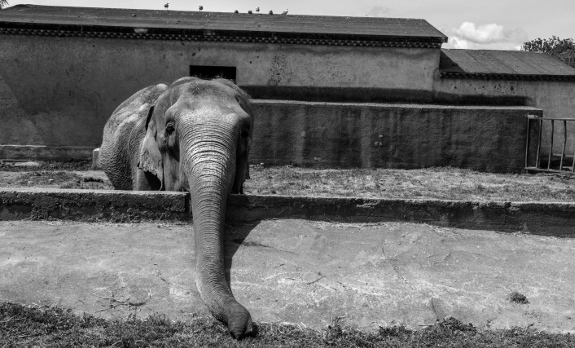 Born Free believes this practice has no place in the 21st century and is calling for the “Secretary of State’s Standards of Modern Zoo Practice”, which outline standards for British zoos, to be amended, as a minimum, to end the use of such implements in zoos.”

In 1860, like many of his elephantine counterparts, Jumbo was orphaned at the hands of ivory poachers and shipped to Europe as a calf to spend his life imprisoned.  He was made to give rides at London Zoo where he spent most of his life and was then sold to a travelling circus. One poster even advertised him as the ‘The Children’s Pet.’

Though he never harmed a human, he suffered night rages so extensive that one episode led to him smashing off his own tusks.

“Examples of extreme suffering amongst captive wild animals are, tragically, not infrequent”, commented Draper. “Elephants are known to suffer from numerous physical and psychological problems in captivity, with lameness, obesity and repetitive abnormal behaviour thought to be rife in elephants in zoos and circuses. They also experience significantly compromised longevity, and reproductive problems and issues relating to high mortality rates in infants and youngsters mean that the population of elephants in captivity in zoos is not sustainable. Some sources in the zoo industry are keen to import elephants to zoos from range countries to support captive populations. Born Free is convinced that this is wholly unacceptable and should not be permitted. A moratorium on the export of elephants from range states to captivity is the only defensible action.”

Jumbo was sold to Barnum’s circus and, in 1885, he travelled to Ontario, Canada. This was where he became the victim of train crash and died of internal bleeding.

While his death was accidental, the abuse suffered by elephants and other species around the world in zoos and circuses is still endured today. The Born Free Foundation has consistently called for the end of the use of wild animals for our entertainment. More specifically, Born Free looks to end the exploitation of wild species, including sentient wild animals such as elephants in circuses.

Draper concluded: “While there are no elephants currently in UK circuses at present, it remains entirely possible that a travelling circus could introduce elephants into its show. Whilst ending the use of wild animals in circuses is under consideration in England, Scotland, Wales and Northern Ireland, none have implemented the necessary legislation despite widespread public, Parliamentary and professional support. Born Free is calling for the governments in Westminster, Belfast, Cardiff and Edinburgh to act swiftly to prevent the use of wild animals such as elephants in circuses once and for all.”

Sir David Attenborough’s investigation into the tragic story of Jumbo should inspire action today to hasten the end of this form of wild animal exploitation. Today, Born Free renews its call for an end to the use of elephants and other wild animals in circuses and is asking people to write to Environment Secretary, Michael Gove MP (correspondence.section@defra.gsi.gov.uk), urging him to bring the curtain down on this practice without delay.