For the first two weeks of this month, it has been a hive of activities in Amboseli. Despite the much-awaited rainfall we received last month that affected our work at some points and inaccessibility in some areas due to bad weather, we pushed through to accomplish our mission before the year end.

Thanks to our reliable Land Rover that proved efficient, we were able to construct predator-proof bomas, set up water harvesting structures, distribute and fix solar lighting systems, supply and install energy-saving jikos (stoves) to women as well as monitor the progress of digging pit latrines. These activities make up our SMART boma concept that uses simple technology to provide solutions for the community and thereby the environment and wildlife. 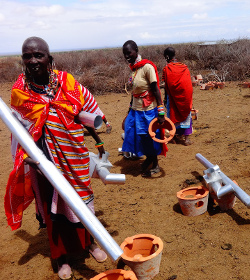 We constructed four predator-proof bomas in Mbirikani and Kaputiei areas.  As per the norm, we had administered questionnaires in advance to obtain the views of the community on this project.  The bomas now stand at 262 in total in the whole ecosystem.

As we received rainfall in the past month, it was our hope to have more community members get clean drinking water in their homes. We delivered the requisite materials and set up the structures where the predator-proof bomas exist. So far, there are a total of 57 water harvesting structures in the ecosystem.

30 solar lighting systems were supplied to 30 different households. These systems are part of our SMART boma concept. Two units were donated to two households per predator-proof boma. In total, there are 45 households that enjoy solar lighting in the ecosystem.

A week before constructing the four predator-proof bomas, we supplied energy-saving jikos (stoves) to different households in Risa Village. The project aims at reducing the rate of habitat destruction resulting from cutting firewood for cooking as well as decreasing carbon emission that has a negative impact to our environment and health. Over 250 households in the ecosystem have benefitted from these jikos over the last three years.

Five homesteads that also have the predator-proof bomas will benefit from pit latrines. The digging is ongoing and we hope to complete them early next year.