Below, you will find Born Free’s responses to Part II of the questionnaire (questions 1-4) with some explanatory background. Our responses under question 1 (1.1-1.11) are focusing on actions taken by the UK in recent years.

*Quick note: When you tick a ‘Yes’ button, a comment box appears. If you do not have any details to share, feel free to ignore it and go to the next question.

*Background: in October 2018 the UK Government hosted the Illegal Wildlife Trade Conference in London, the fourth in a series of international conferences, and the second to be hosted in London. The conference generated a great deal of public and media interest.

*Background: the UK Government-funded Illegal Wildlife Trade Challenge Fund (IWTCF) has committed £37m to 113 projects around the world, in over 50 countries, since 2014, which have included projects focused on sustainable livelihoods, strengthening community anti-poaching efforts, and mitigating human-wildlife conflict, and connecting improved community livelihoods to wildlife protection.

*Background: the UK Government’s Illegal Wildlife Trade Challenge Fund has financed a number of projects focused on increasing enforcement capacity in developing countries. In addition, the UK’s National Wildlife Crime Unit and Border Force CITES Unit provide intelligence and training to police officers and other enforcement personnel, both in the UK and in developing countries, most recently in Malawi in collaboration with the RSPCA.

*Background: UK enforcement authorities include the specialist CITES Border Force team, responsible for monitoring trade in protected species across the UK’s borders. With limited resources, this team does really important work at our ports, airports and postal hubs, in collaboration with wider enforcement networks such as the National Wildlife Crime Unit and the police.

*Background: the UK wildlife enforcement authorities collaborate closely with EU Member State authorities through Europol and with international policing bodies such as Interpol and participate in international operations involving EU Member States and aimed at clamping down on wildlife trafficking. Most recently Operation Thunder in 2020 which involved 103 countries collaborating in a month-long police and customs cross border operation (14 September – 11 October 2020) resulted in large seizures of protected wildlife and forestry specimens and products, triggering arrests and investigations worldwide.

*Background: the UK-led 2018 Illegal Wildlife Trade Conference resulted in a Declaration signed by 65 countries, which included commitments to improve collaboration between source, transit and consumer countries. The financial and transport task forces that have emerged from this and the previous London conference, which are both chaired by UK representatives, continue to foster this collaboration. The UK Government funded Illegal Wildlife Trade Challenge Fund has also provided funds to projects in partnership with many government agencies and enforcement authorities in developing countries.

*Background: the UK’s Illegal Wildlife Trade challenge fund has financed projects in collaboration with a number of businesses.

*Background: Wildlife Trafficking (‘CITES crimes’) and cyber-enabled wildlife crime, are identified among the UK’s seven current wildlife crime enforcement priorities, and as such feature strongly in the work of the relevant policy and enforcement bodies. Penalties for offences under the UK’s Control of Trade in Endangered Species Regulation (which implements CITES in UK law) include up to 6 months imprisonment and/or a fine on summary conviction, and up to 5 years and/or a fine on conviction on indictment. CITES offences are notifiable and recordable under the UK’s Home Office Counting Rules for crime.

*Background: the National Wildlife Crime Unit acts as an intelligence hub, coordinating the collation and dissemination of information and intelligence to national enforcement networks, and acting as a focal point for collaboration with international policing bodies. The strong collaboration between UK wildlife enforcement authorities and international policing bodies improves information sharing across borders.

*Background: the 2018 London conference on Illegal Wildlife Trade marked a significant effort by the UK Government to engage with other countries and jurisdictions and resulted in the London Declaration (signed by 65 Governments, including a number of EU Member States), committing the signatories to a series of collaborative actions. The Conference also further consolidated the work of the Transport Task Force and resulted in the creation of the Financial Task Force, two important international bodies chaired by UK representatives that seek to improve collaboration on tackling illegal wildlife trade through engagement with specific mechanisms.

*Quick note before responding to Question 2: All these initiatives are important, but we believe the ones selected below are the key priorities for the new Action Plan. 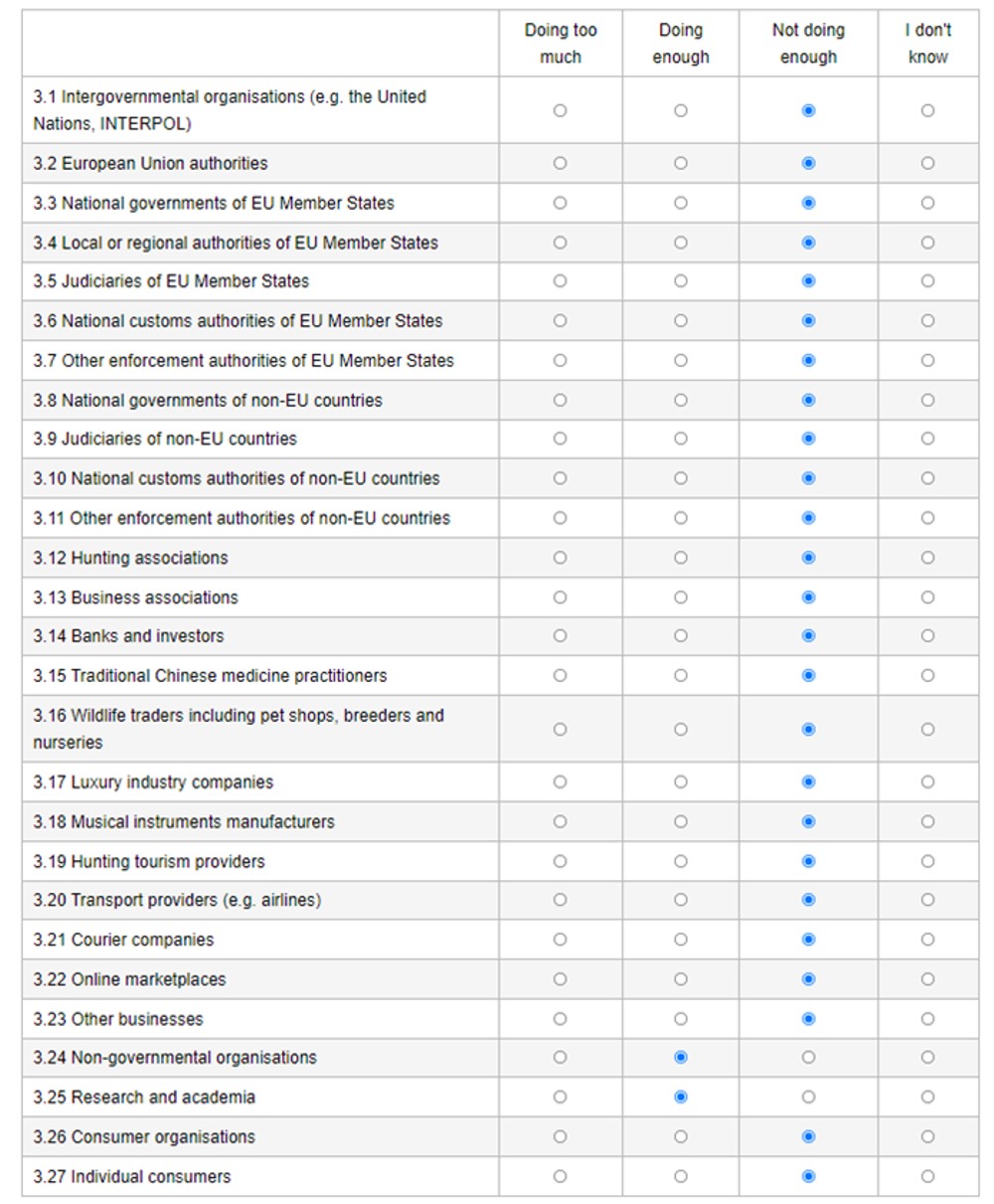 *Background: Too often social media, tour operators, exotic pet traders and pet keeper groups and associations promote wildlife-related activities that are unsustainable, including the trade and use of endangered and protected species. This sends a confusing message to consumers that can increase demand for wild species. Additionally, some antique dealers and their associations continue to promote and participate in the ivory trade in the EU and beyond.

For this reason, we believe the following businesses areas are key to combatting wildlife trafficking successfully, and need to be asked to take coercive and effective measures as a priority:

We believe the following issues need to be addressed by the new Action Plan in priority:

Thank you for taking the time to complete this important questionnaire.