Nelson was rescued from Parc Zoologique du Bouy, France, in April 2015 by French animal rescue charity Fondation 30 Million d’Amis when the zoo fell into liquidation and the owner was arrested for wildlife trafficking.

Once rescued from the zoo, Nelson was transported to Belgium, where he was cared for and rehabilitated by the specialist team at Natuurhulpcentrum, a wildlife rescue centre which provides temporary care for wild animals before they are permanently rehomed.

In May 2017, Born Free raised funds to take Nelson to his forever home at our Big Cat Sanctuary at Shamwari Private Game Reserve. He was transported alongside another rescued lion, Ciam, who had been confiscated from a private owner in France who had been keeping him as a pet.

Together, Nelson and Ciam made the trip by road and air, and were even waved off by Born Free Patrons Jim Moir (AKA Vic Reeves) and Nancy Sorrell, who journeyed to Belgium along with Born Free Co-Founder Virginia McKenna OBE to oversee their departure for Africa.

When he arrived at Shamwari, Nelson was able to feel African soil underneath his paws for the first time, and today, at the age of almost 22, Nelson’s loud roar continues to echo over the valleys and remains a favourite wake-up call with the guests staying at a nearby lodge. Still wary of humans, he often hides away in a shady spot! 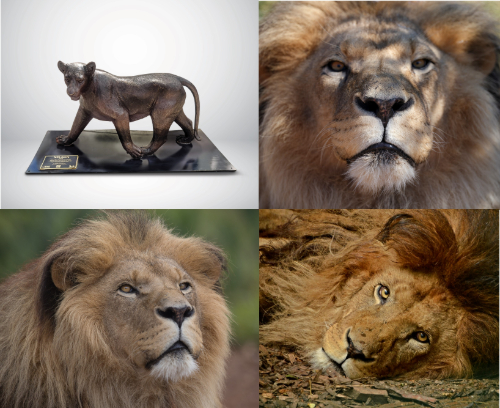