Joy and George Adamson were the real-life married couple who raised and rehabilitated orphaned lion cub Elsa and released her back into the wild, inspiring the 1966 film Born Free.

Pioneering naturalist, author and artist, Joy wrote her bestselling book Born Free in 1960, based on her husband George Adamson's diaries which documented their story.

In the film adaptation, Joy was played by Virginia McKenna OBE, whose real-life husband Bill Travers MBE portrayed George. Their experiences on set proved a life-changing experience for Virginia and Bill, and a turning point in their careers. They went on to co-found The Born Free Foundation, along with their eldest son Will Travers OBE, in 1984.

Whilst filming Born Free on location in Kenya, George was chief technical advisor, helping Virginia and Bill to work safely with lions, both on and off the set. George became known as known as Father of Lions, thanks to his devotion to Kenya’s wild lion population and his ground-breaking work to rehabilitate captive or orphaned lions for release into the wild.

Joy and George eventually separated, but Joy remained an advocate for wild animals for the rest of her life. George formed a lifelong friendship with the Travers family, and later worked with Bill on a number of wildlife documentaries, including Born Free's sequel The Lions are Free, and Christian the Lion at World's End. 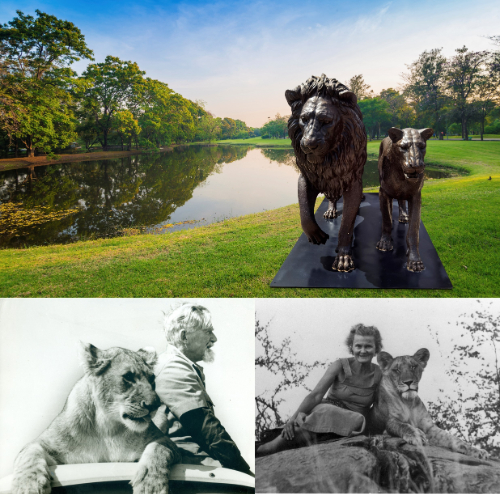 Clockwise from top: Joy and George's sculpture; Joy Adamson with Elsa the lioness; George Adamson and a young lion.