Iman is a young, orphaned lioness who was confiscated by police at the Somaliland/Ethiopia border. It is believed Iman was taken from the wild as a young cub in Ethiopia, and at just four to six weeks old, she was destined for life as an exotic pet for a buyer in the Middle East.

Initially Iman was cared for by Cheetah Conservation Fund in Somaliland, but as she grew in size, Born Free stepped in to offer Iman a lifetime home at Ensessa Kotteh, our wildlife rescue, conservation and education centre in Ethiopia. With permission from the Ethiopian Wildlife Conservation Authority and His Excellency Muse Bihi Abdi, President of the Republic of Somaliland, Iman was moved to Ensessa Kotteh in August 2019.

Located just outside Addis Ababa, the centre provides specialist care for orphaned or injured wild animals and those confiscated from illegal trade or rescued from captivity in the country.

Ensessa Kotteh is currently home to a number of lions, cheetahs, hyenas, geladas, grivet monkeys, baboons and tortoises. The sanctuary also conducts conservation activities, provides outreach and environmental education and helps the Ethiopian government build capacity in wildlife management. Where possible, animals arriving at Ensessa Kotteh are rehabilitated and returned to the wild. If this is not possible, they are given lifetime care in spacious, natural enclosures.

Sadly, Iman will never be able to be released back into the wild, because she was taken from her mother at such a young age, and hasn’t been taught the essential skills she needs to survive. At Ensessa Kotteh, Iman has thrived, and will be able to live free from harm and thanks to the team’s specialist care, for the rest of her life.

Born Free opposes the keeping of wild or exotic animals as pets, and the associated trade in live animals. We proudly rescue individual animals that have either been kept as pets or captured from the wild to supply the demand of the pet trade. 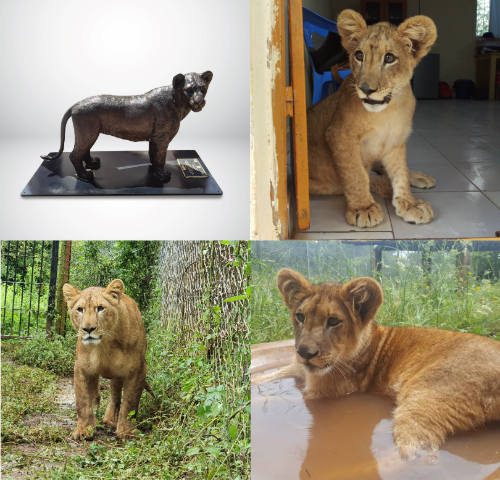 Clockwise from top left: Iman's sculpture, Iman shortly after se was rescued, Iman arrives at our sanctuary, Iman has grown in stature and confidence.