Born in a lion breeding facility in South Africa, ‘Hilts’ was most likely taken from his mother when just a few days old and hand-reared by unwitting, paying volunteers. Tourists would have paid to take selfies while petting him, and when he became older, to walk with him. He would then have been used for breeding purposes.

At this stage in his life, most lions in his situation would be transferred to canned hunting facilities to be shot by paying hunters, then their bones and other body parts sold for traditional medicines.

But this is where ‘Hilts’’ life changed. ‘Hilts’ was rescued in 2019 and is now safe. However, the canned hunting industry is brutal, dangerous and tough – for animals and humans. We can’t reveal his real name, where he is now, or use any close-up imagery of ‘Hilts’, only that he is free from harm and making a good recovery from his ordeal.

When ‘Hilts’ was first rescued, his carers reported that he was petrified of people and spent most of his time hidden deep in the thick vegetation of his enclosure, but he gradually became more relaxed and has made good progress. He eats and drinks well, and enjoys time exploring his enclosure these days, rather than hiding away.

Hand-rearing cubs, cub petting, walking with lions, canned hunts. The canned hunting industry doesn’t end when a lion is killed. Born Free is absolutely opposed to canned hunting and campaigns to bring an end to this cruel practice once and for all. In December 2021, after decades of campaigning and years of waiting, Born Free welcomed UK Government plans to end the legal import of trophies from hundreds of wild animals, shot for ‘fun’. 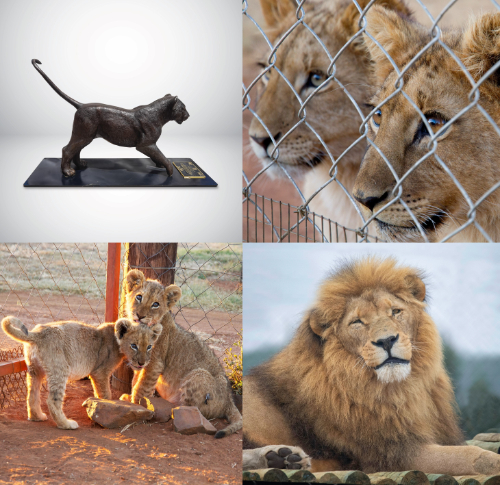