Christian became world famous when his story went viral on YouTube, and captivated the imaginations of millions of people. But did you know, the famous footage of the young lion emerging from the African brush to greet his former owners was actually filmed by Born Free’s Co-Founder Bill Travers MBE, as part of his documentary Christian the Lion at World’s End?

Born in captivity and purchased as a cub by John Rendall and Ace Bourke from Harrods in 1969. As he got bigger, it became obvious that Christian would soon outgrow his London home (a furniture shop in the King’s Road), and after a chance meeting with Virginia McKenna and Bill Travers, a plan was hatched to get Christian back to Africa, his ancestral home. Virginia and Bill offered temporary sanctuary to Christian in their Surrey garden, where his night-quarters were a gypsy caravan, until he could be safely transported to Kenya, and placed into the care of George Adamson for rehabilitation.

George successfully released Christian into the Kora National Reserve, and nearly a year later, Rendall and Bourke visited in the hope of seeing Christian once more. To their amazement, they were greeted by an enormous, fully-grown young lion who not only remembered them, but appeared to embrace them with delight. Christian went on to become the head of a small pride. His journey to freedom symbolises Born Free’s vision that every individual matters and mission to ‘Keep Wildlife in the Wild.’

It was with great sadness, that we learned of the death of John Rendall at the age of 76, in January 2022. John was always a passionate campaigner for wildlife and, together with Ace Bourke, retold Christian’s evergreen story for different generations and for different audiences as a source of eternal inspiration. On behalf of the Born Free Team, we would like to thank John for playing an integral role in rewilding Christian and symbolising Born Free's vision that every individual matters.

Born Free opposes the keeping of wild or exotic animals as pets, and the associated trade in live animals. We investigate and expose the 'exotic pet' industry, challenge both the legal and illegal trade in wild animals, and campaign for national and international legislation to reduce and, where possible, end this practice.

We proudly rescue individual animals that have either been kept as pets or captured from the wild and provide them with a high standard of lifetime care in sanctuaries or – where possible – return them to life in the wild. 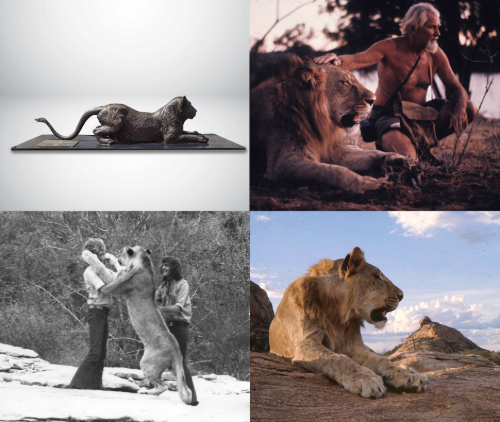 Clockwise from top left:Christian's sculpture, Christian with George Adamson during his rehabilitation, Christian in the wild, Christian reunites with John and Ace.

Artistic representation by Gillie and Marc.