In 2015, Cecil the lion made global headlines when he was brutally killed by an American trophy hunter in Zimbabwe.

A magnificent 13-year-old dark maned male lion, and the head of two prides, Cecil was an important part of an ongoing research project, and a favourite with tourists who visited the region on safaris. The world was shocked to learn he had been lured away from the relative safety of the National Park where he lived, shot and wounded with a bow and arrow, and only finally killed several hours later.

The suffering Cecil endured touched hearts and minds. The cowardice and selfishness of the hunter generated outrage. There were strong calls for trophy hunting to be banned, for countries to prohibit trophy imports, and for airlines and other carriers to cease transporting wildlife trophies. A wide debate ensued on the ethics and morality of trophy hunting, and its purported value to local communities and wildlife conservation. Change was promised, studies were initiated, and reports and papers were published on the trophy hunting industry, its impacts, and the possible consequences of restrictions or bans.

Fast forward to 2022, and more than 5,000 lion trophies have been exported, the majority from captive bred lions in South Africa.

Born Free opposes the killing of animals for sport or pleasure, on ethical grounds. We also challenge the claims made by proponents of trophy hunting that it delivers significant conservation and community benefits, or that it positively contributes to the sustainable use of wildlife. While we respect the right of sovereign nations to manage their own wildlife, we hope that, over time, more will decide to reject trophy hunting and seek other, benign ways of securing a future for our global wildlife heritage.

In December 2021, after decades of campaigning and years of waiting, Born Free welcomed UK Government plans to end the legal import of trophies from hundreds of wild animals, shot for ‘fun’. 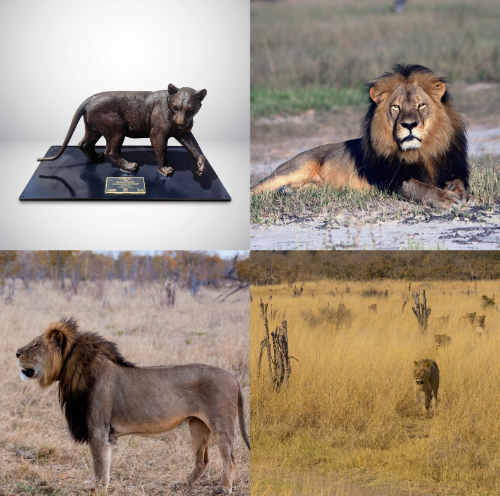 Clockwise from top left: Cecil's sculpture, Cecil in the park, Cecil's pride, Cecil was known for his dark mane.