Fourteen-year-old Black was rescued by Born Free in partnership with Four Paws from a beast wagon in Bulgaria, along with his brother Jora.

After the Bulgarian government banned the use of wild mammals in circuses, Black and Jora languished for months in a 2.5 metre by 2.5 metre trailer, their muscles growing weak through lack of food and exercise, and with nowhere to go. In September 2015, aided by supporters, Born Free rescued the two lions and brought them ‘home’ to Africa. They were transported 10,500 miles via the UK to a new life at Born Free's Big Cat Rescue Centre at Shamwari Game Reserve, in South Africa.

However, their suffering due to being kept in captivity and used for entertainment since they were cubs was still evident when they arrived at Shamwari. The end of Black’s tail was damaged by Jora sucking it compulsively, a stereotype behaviour brought on perhaps by the lack of anything to do in the trailer. The damage was so extensive that the end of his tail needed amputating.

But now, lavished with loving, expert care, the brothers have transformed at our sanctuary, recovering their strength and dignity. The flashing lights and blaring music of the big top are a distant memory as their awesome roars echo across Shamwari’s hills and valleys. They spend their days chasing and playing in the expanse of their spacious bush enclosure. 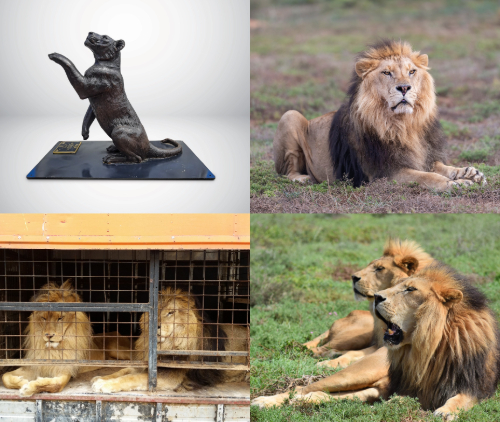