Paraceratherium, elasmotherium, diceratherium, chilotherium, coelodonta antiquitis and teleoceras were the ancestors of modern day rhinos. They were impressively diverse and wide ranging. Paraceratherium, for example, was a giant hornless rhino species that lived throughout Eurasia up to 34 million years ago. It stood at five metres tall, making it one of the largest land mammals to have ever existed.

Whilst species such as Paraceratherium or the woolly rhino (yes, similar to the woolly mammoth!) are extinct, what is the status of the five present day species of rhinoceros: the black, white, greater one-horned (Indian), Sumatran and Javan?

The world’s rhino populations have declined massively in recent history; from potentially a few million in the 19th century to historic lows of approximately 25,000-30,000 individuals today. The fate of the rhino has never been more precarious than in recent decades. Incorrectly famed for its medicinal properties, the illegal trade in rhino horn has created a booming market in Asia and bloodshed in the wild. 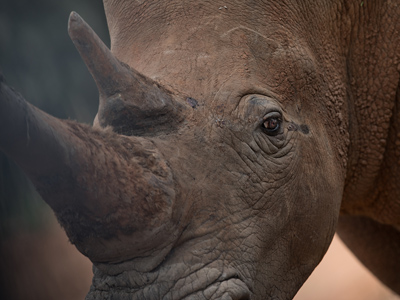 Similarly, Born Free also supported Rhino Research and Conservation Aaranyak in Assam, India in 2018. It is working to conserve the greater one-horned rhino, numbering approximately 3,500 individuals and listed as Vulnerable by IUCN. They are threatened primarily by poaching, habitat loss, human-wildlife conflict and invasive weeds (which are unpalatable to rhinos but outcompete native plants). Here, we supported the work of the forest guards, who protect the rhinos in Assam. We provided new field equipment, such as shoes and sweaters, to help 159 forest guards deliver their duties in difficult terrain and weather conditions, and we contributed to the purchase of 20 new radios and 10 high-powered search lights.

Rhino horn belongs only to rhinos. Until that fact is recognised globally, rhinos will be at risk. At their critically low levels, rhinos are still incredibly vulnerable to extinction. Whilst their ancestors may have naturally died out millennia ago, the lifespan of today’s rhino species should not be rapidly shortened because of human greed. Let today’s rhinos thrive in the wild and not only in museums and history books.