The Future For Orangutans Is In The Balance, But You Could Help Tip The Scales In Their Favour.

Gold is the colour of an orangutan’s hair in the morning, as they rise, backlit by the sun in their treetop nests. At that time of day, the rainforest canopy echoes to the haunting dawn chorus of gibbons and birdsong. Sadly, all too frequently, that chorus is accompanied by the sound of chainsaws and heavy machinery.

Gold is also one more reason driving the destruction of orangutan habitat, or at least the human love of the precious metal found in deposits beneath the forest. Controversially, some of that destruction on the Indonesian island of Sumatra is around a mine owned by a British company with Scottish origins, Jardine Matheson, and it adds to the pressure on the rarest species of orangutan.

Until recently, scientists recognised two species of Asia’s only great ape, each named after the island where they are found – the Bornean orangutan and the Sumatran orangutan. Then in 2017, genetic and morphological studies of the most southerly population of orangutans in Sumatra revealed that – to everyone’s surprise – the orangutans of Batang Toru are a separate species, named after the surrounding district, Tapanuli.

Unsurprisingly, no sooner was it described by science, the species was assessed by the IUCN* as ‘Critically Endangered’ with a population of fewer than 800 and put on the Red List. As Chairman of the Ape Alliance, a loose coalition of 100 organisations working for the conservation and welfare of all apes, I took a strong interest in this discovery.

In 2019, as parts of London were brought to a standstill by Extinction Rebellion, I found myself sitting in the board room of Jardines being reassured by the company’s senior management that there were no plans to expand the Martabe Gold Mine into the habitat of the Tapanuli orangutan. Jardines, which has been controlled by the Keswick family since the 19th century, acquired the gold mine in 2018 through its Indonesian subsidiary Astra International. The meeting had been arranged by Mighty Earth, an influential international organisation that tracks which companies are profiting from deforestation. 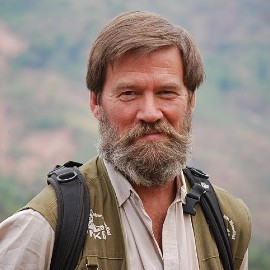 Like all life on earth, including orangutans, humans depend on the ecosystem services provided by natural processes and yet they do not appear in our balance sheets.

There are other threats to the Tapanuli: Indonesian civil society organisations have been working to halt the building of a hydro-electric dam that would flood a key corridor between two almost fragmented populations of Tapanuli orangutan. The dam had been reported to be financed by the Bank of China, but in a series of meetings with the London and Jakarta branch managers we were assured that although a request for funding had been made to the Bank of China, the project was still under review. To their credit, the Bank of China eventually decided not to fund the Batang Toru dam. Work on the construction was further delayed by the global pandemic last year but not halted completely.

The risks of building a dam or a mine in an area prone to earthquakes were tragically highlighted by a landslide on 29 April this year, killing 13. A similar incident late last year killed one construction worker, and another was killed at the end of May, brining the total to 15 lives lost. The Indonesian Forestry and Environment Minister was reported to be evaluating the case for the dam, but construction continues.

Satellite images taken this year show that the Martabe mine is still expanding; about five hectares of forest were cleared between April and May. This is on top of the 27.38 ha destroyed by the mining operation overall – 8.67 ha of which were destroyed since the purchase by Jardines in 2018.

Orangutans are threatened by loss of habitat to industrial agriculture– vast monoculture plantations of fast-growing trees for paper pulp as well as the more familiar palm-oil plantations. Companies in the public eye such as Hershey, the US chocolate maker, are working to make their supply chains ‘deforestation-free’.

Last month, in response to a complaint by Mighty Earth, Hershey and others have called on Jardines to extend their ban on deforestation for palm oil across commodities – including gold. Public pressure is a powerful force – we all have the power to influence the behaviour of corporations by the choices we make in our shopping. But globally, deforestation continues.

Surely, we can do better. This is the year the human world is supposed to agree on a new deal for nature. The UN is hammering out a ‘post-2020 Biodiversity Framework’ to halt the loss of biodiversity and we are beginning the UN Decade of Ecosystem Restoration. The UNFCCC COP26 climate talks due to be held in Glasgow in November are concluding the details of carbon markets, including valuing the central role of tropical forests. All signs of hope that our species is coming to its collective senses and learning to live within the finite bounds of our one planet.

And yet for some, it seems to be business as usual – despite the predictions based on the best available science that business as usual will lead to ecosystem collapse on a global scale. Now is the time for the global economy to move from an extractive view of nature, where nature is seen as an ‘externality’ with a value of zero until mined or logged to a more regenerative view. Like all life on earth, including orangutans, humans depend on the ecosystem services provided by natural processes and yet they do not appear in our balance sheets.

If we want fresh air to breathe, fresh water to drink and food to put on the table, we must begin to value nature as the foundation for our economy, not an externality. That is the true gold.

Support our campaign to speak out against the construction of a hydroelectric dam through the habitat of the Critically Endangered Tapanuli orangutan, and help support orangutan care and conservation by adopting an orphaned orangutan.

Ian Redmond OBE is Chairman of Ape Alliance, a trustee of the Orangutan Foundation and a co-founder of www.Rebalance.Earth

*International Union for the Conservation of Nature