Covered from head to toe in leathery hide, a striking horn protruding from its ancient skull, the muscular, massive, and frighteningly swift rhino is one of the most majestic creatures in all the animal kingdom. Their appearance makes them seem like the last living dinosaurs. A relic from a previous world. However, at the rate at which the rhino population is declining, they won’t last very long… unless we do something.

My passion for conservation was first ignited in the summer of 2019 during my family's second trip to Africa. We saw many fantastical creatures when we ventured into the wild, African bush. I particularly treasure one memory: As we turned the corner in our open jeep, we were immediately greeted by 3 lions, just meters away, feasting on the fresh carcass of a gazelle. We were so close, that every time a lion would take a bite, we could hear the flesh being ripped and the bone being crushed. Africa was amazing, a place that I will hold close to my heart forever. 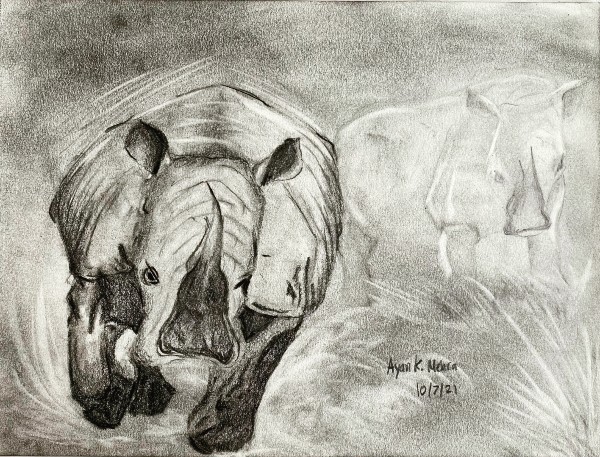 Though the animals were abundant and diverse, one animal eluded me: The rhino. We had seen a few rhinos scattered around the expansive savannah, but from so far away that they looked like rocks. The main reason that rhinos are so scarce is because of illegal trafficking of rhino horn. Pound for pound, rhino horn is more expensive than gold. Though rhino horn has no proven health benefits, it continues to be used in some East-Asian traditional medicines/remedies. This medicine, called Muthi, is made by grinding & mixing rhino horn with many other wild animal parts, to create a liquid that you can drink. Muthi is thought to cure cancer and arthritis, along with many other health related issues. However, these beliefs are grossly misplaced, as rhino horn is neither medicinal nor magical.  Rhino horn is just keratin - the same thing as our fingernails!

With such high demand for rhino horn, some impoverished people in Africa are willing to risk long years of jail time, and sometimes even their own lives, to poach rhinos just to feed their families. Horrible things are being done to rhinos as a result of this, and the populations of rhino in the wild have declined dramatically.

The solution to this crisis isn’t only to prosecute poachers. This is a complex problem which needs a 2-pronged approach. On the one hand, we need to raise awareness in East-Asia that scientific evidence proves that rhino horn has no magical or medicinal properties. If people stop buying Muthi, then the demand for rhino horn will disappear, and that will help keep the animals safe.  On the other hand, changing deep set beliefs on traditional medicine takes time.  So, while we work on awareness building on what Muthi really is, we need to protect rhinos and other endangered animals in Africa from poachers by supporting conservation efforts.

As the first youth ambassador for Born Free outside of the UK, I hope to use this platform to raise even more awareness for wildlife conservation in general, and rhino conservation in particular. While a lot has been done over the years, we still have a long way to go before we restore rhino populations to healthy levels.  Indeed, in our lifetime itself, we will see the loss of the subspecies of rhino - the Northern White - as the last 2 surviving females live out their days in Ol Pejeta conservancy in Kenya.

Rhinos play a critical part in the natural ecosystem of the bush.  As megafauna, their role is to ensure that there isn’t an imbalance in the ratio of carnivore and herbivore populations. They do this by grazing sufficiently to prevent an overgrowth of grass, and thereby naturally curbing an excess growth of the herbivore population. Unlike elephants, who evoke deep human empathy with their emotional intelligence and uncanny memories, the rhino often gets overlooked. I believe rhinos are a critical link to our natural history. They are a reminder of what the world looked like millions of years ago, when dinosaurs roamed the earth.  And their story matters, just as much.