PLANET OF NO APES? 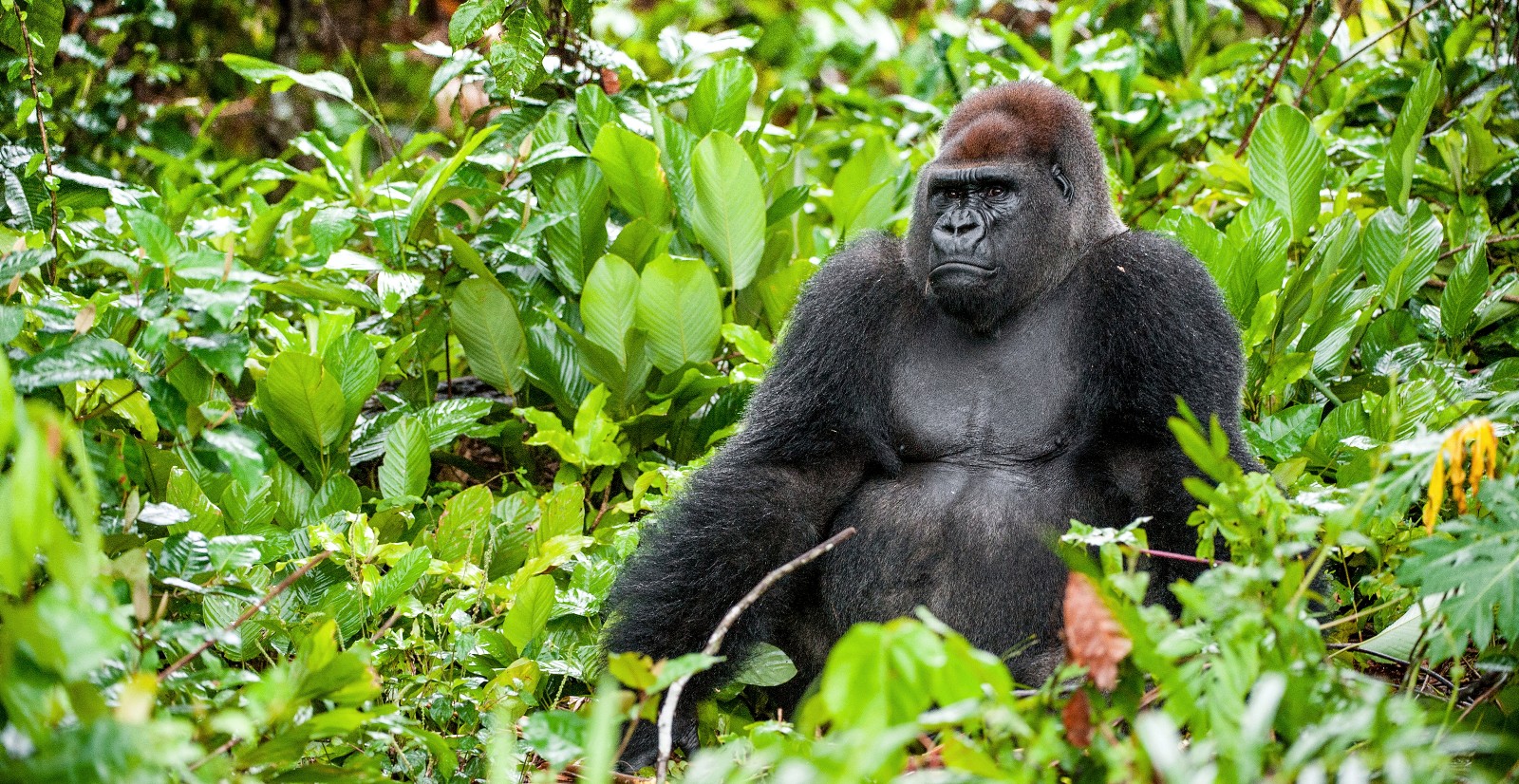 Popular movies depicting war between humans and the other apes are fanciful fun, but in the real world, something like a war has been in play for decades and the apes are very much on the losing side. The figures are frightening. A century ago, within the memory of the oldest people alive today, there were probably millions of apes living in the forests and woodlands of Africa and SE Asia. Now, they are collectively down to a few hundred thousand and declining yearly.

We are logging and mining their habitat, replacing rich forests with monoculture plantations, shooting them for bushmeat and stealing their babies to sell into the animal trade. Is there any wonder the numbers are going down? The only bright spot in this bleak picture is the story of the mountain gorillas, whose numbers reached a low of probably under 400 in the 1970s but, thanks to the concerted efforts of governments, non governmental organisations and local communities, now number around 1,000. The question, then, is can any of the lessons from the mountain gorilla success story be applied to the other apes before it is too late?

The underlying problem is simple – ever since we invented agriculture, we humans have been clearing forests to plant crops and complaining bitterly when the animals we displaced came and ate our produce. Our cousins, the apes, then, are seen as the competition. And although some human cultures respect them almost as a neighbouring tribe, in others ape meat is believed to have special properties – by eating it you gain the strength of a gorilla or the cunning intelligence of a chimpanzee.

Paradoxically, we have also always been fascinated by apes and their sometimes uncanny similarities to ourselves. This has led them to be coveted as pets by wealthy, powerful people, even though they quickly grown unmanageable. Although this is now illegal in many countries, and apes are protected in every range state, the demand for apes as pets, ‘photo-props’, zoo exhibits, circus performers etc, still exists and so poachers still kill adult apes to capture their infants alive. This means that every orphaned infant rescued alive represents several dead apes. And not all infants survive the process; gorillas are the most fragile with four out of five likely to die before reaching skilled care. Given that at least two adults are normally killed to capture one baby, a live rescued infant may mean four who did not make it, each one having been captured by killing the parents, ie 14 dead for one live gorilla. 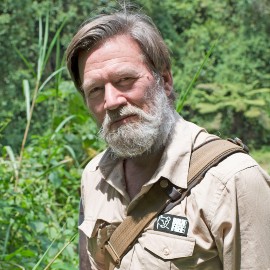 “By saving apes and their habitat, we save countless other species. It may seem like an insurmountable task, but by working together we can make a difference. We all benefit from forests so, surely, we all have a part to play in protecting them and therefore the apes that live there?”

Over the past four decades, I have seen almost every aspect of the threats to apes in the wild, and the sometimes appalling conditions they endure in captivity. After graduating as a biologist in 1976, I had the extraordinary good fortune to get a job as a volunteer research assistant with Dr Dian Fossey, the world-famous gorilla researcher, in Rwanda. On my first day in the field, we didn’t find the gorillas because we came across fresh poacher tracks, followed them to 13,000ft on Mount Karisimbi and raided their camp – quite an exciting initiation into life at the Karisoke Research Centre. The next day I finally met my first free-living gorillas. After hours of hiking and tracking them we crawled under a bush into a glade and there they were, just going about their business of feeding, playing and bringing up the kids – it felt like joining a family picnic.

A year later, I had the pleasure of introducing David Attenborough and a BBC film crew to the gorillas for the famous ‘Life on Earth’ sequence – an amazing moment captured on film for the world to share, but this was just days after poachers had speared to death and decapitated Digit, a young silverback I had come to regard as a friend. Ever since, I’ve been alternating between truly wonderful encounters with apes (and elephants) in their natural habitat and truly awful examples of cruelty, poaching and (in some captive cases) plain neglect. But some things have improved; the decline in mountain gorillas has been reversed, and we are seeing a fragile recovery for all the other apes - even though we haven’t turned around the decline – yet!

In the mid-1990s, reports from Africa indicated that the killing of apes was on the rise to supply urban bushmeat markets with meat, facilitated by the opening up of forests for timber extraction. In particular, the shocking photographs of butchered apes, by Karl Ammann, raised the alarm. I convened a meeting of organisations in 1996 to discuss how we might collaborate to tackle this and other threats. We called this new coalition the Ape Alliance, set up several working groups and soon had a website www.4apes.com that acts as a portal to all the member groups.  Born Free has played a central role from the outset, acting as the administrative hub for the Ape Alliance and supporting its coordinator, Katy Jedamzik. The coalition continues to grow and is now up to nearly 100 member organisations worldwide. By speaking with one voice and pooling resources to tackle the threats to apes, we have more chance of success than working alone.

The Ape Alliance moved up a level in 2000 when it asked the United Nations to do something about plummeting ape numbers. The result, GRASP, the UN Great Apes Survival Partnership www.UN-GRASP.org, is the only UN body concerned with the fate a particular group of species. Once again, Born Free was involved from the outset and provided a Technical Support Team for more than 10 years which helped many of the 23 countries with great apes to develop policies that would ensure their survival. The difficulty, though, is the implementation of those policies in the face of commercial pressures to exploit forests and development goals that ignore the importance of apes and their habitat.

Helping governments and communities to save apes is something Born Free contributes towards in several countries. For example, we have been supporting the brave rangers and wardens of Kahuzi-Biega National Park in Democratic Republic of Congo since 2000, providing equipment, housing and vehicles to help them protect the eastern lowland gorillas, chimpanzees, elephants and other wildlife in this World Heritage Site. We have also supported the Pole Pole Foundation, a local Congolese NGO that works with communities around the park and built a first rate school that not only educates its pupils, but trains them in organic farming and forestry techniques for a more sustainable future.

In Cameroon, Born Free helps the Last Great Ape Organisation (now evolved in EAGLE across nine central African countries) to work with the law enforcement agencies and judiciary to arrest and prosecute wildlife criminals. From being a country that had never seen a prosecution for wildlife crime, Cameroon now has cases in the courts every week, and LAGA ensures the convictions are reported in the local press and media to discourage others from killing or trading in protected species. This success has led to similar efforts in Congo, Gabon and a growing number of African countries making up the EAGLE network – Eco Activists for Governance and Law Enforcement www.bornfree.org.uk/campaigns/further-activities/eagle/

And as a founder member of the Species Survival Network (www.ssn.org), Born Free works with like-minded organisations around the world to support the application of the Convention on International Trade in Endangered Species (CITES), under which all ape species are listed on Appendix I, meaning that the commercial, international trading of apes is banned.

Unfortunately, there are animal dealers prepared to break the law and meet the demand for apes and the poaching continues – usually in countries where law enforcement is weakest. When dealers premises are raided and live apes confiscated, this presents another problem. Skilled care is needed to save the lives of the orphans and if they survive, they may live for 50 years. Born Free has supported ape sanctuaries all over Africa, including the famous Ngamba Island in Uganda, because they are an essential component of wildlife law enforcement. They also provide an educational resource that teaches people the true nature of apes and monkeys but sadly, the sanctuaries struggle to keep up with the rate of confiscations. Increasingly, attention is turning to reintroducing those apes able to adjust to a life in the wild back into suitable forests which can be well-protected. If done according to International Union for the Conservation of Nature guidelines, this can have the added advantage of rebuilding healthy forests – restoring the ‘ape function’ of pruning trees, fertilising the soil and the dispersing seeds that will grow into the trees of tomorrow. This important ecological role is why primates (and elephants) are sometimes called the ‘Gardeners of the Forest’ – as my TEDx talk at Southampton University explains – www.youtube.com/watch?v=hvsWXyIseS0

The trouble with our war against apes (and other primates) is that if we win, we lose. If we wipe them out and convert their homes into agricultural landscapes, the consequences would be disastrous. Deforestation results in a massive increase in greenhouse gas emissions and a massive decrease in nature’s ability to sequester and store carbon. Forests also pump water vapour into the atmosphere through evaporation and transpiration from trillions of leaves. This creates weather systems that encircle the globe, watering fields and filling aquifers in every nation, and yet there is not yet a system for paying for these ‘ecosystem services’ which sustain us all. Thus, in the 21st century, as world leaders are increasingly recognising at the ongoing UN climate talks, we need to stop deforestation and forest degradation and instead, replant corridors between forest fragments and protect surviving, intact forest landscapes; including the animals who keep the forest healthy.

It may seem like an insurmountable task, and certainly no one person or organisation can save the apes, but by working together we can make a difference.  When we buy paper or wooden products, we can look for the FSC logo; when we buy food, fuel or cosmetics we can insist that if palm oil is an ingredient, it comes from a certified source (palm oil plantations can destroy rainforests); and we can make sure our elected representatives support legislation to prevent deforestation and support conservation. We all benefit from forests so, surely, we all have a part to play in protecting them and therefore the apes that live there?

Click here to find out about Born Free’s new appeal - Apes on the Edge - which is raising funds to protect gorillas, chimpanzees and other threatened wildlife in Cameroon’s Dja Biosphere Reserve.