It’s June 21st – the longest day of the year here in the UK. What better day to celebrate the longest-necked animal in the world? says Emily Neil, Born Free’s Field Conservation Assistant.

Our partners at the Giraffe Conservation Foundation (GCF) initiated World Giraffe Day to celebrate this species and raise awareness of its plight in the wild. Giraffes tower over the open plains of Africa, with males standing at an impressive 5.5m high and weighing nearly two tonnes. Despite their long necks, giraffes only have seven neck vertebrate – the same number as humans and nearly all other mammals.

It might surprise you to hear this much-loved species is listed as Vulnerable to extinction on the International Union for Conservation of Nature Red List of Threatened Species. Their numbers have plummeted by a staggering 40% in the past three decades, and only about 111,000 remain across all of Africa today. Habitat loss and fragmentation, human-wildlife conflict, civil unrest, and poaching for giraffe meat, pelt, and tails, are among the major threats to their survival.

Although these are imminent and severe threats, there are many giraffe conservation success stories to highlight on this World Giraffe Day. For example, the rarest sub-species, the West African giraffe, has been pulled back from the brink of extinction by GCF, with support from Born Free. 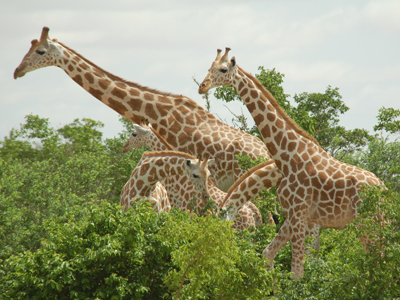 Historically ranging across West and Central Africa, the West African giraffe is today confined to a small southwest corner of Niger. It underwent a dramatic decline in the 20th century due to habitat loss, human-wildlife conflict, and a series of severe droughts, disappearing from the majority of its range and plummeting to only 49 individuals in the 1990s.

Today the population stands at 633 individuals; an 11.05% increase since 2017 and over a 1000% increase since 1990. This is a very encouraging sign for their continued survival. Excitingly, in November 2018, GCF undertook the first re-introduction of eight West African giraffe back into their historical range in the Gadabedji Biosphere Reserve in Niger, an area from which they had been absent for almost 50 years. The translocation was successful; there are now two viable and well-protected West African giraffe populations in the world, and their numbers are continuing to grow.

That’s certainly something to celebrate on this World Giraffe Day!