Pledges and declarations were top of the agenda on the second and final day of the Illegal Wildlife Trade Conference 2018, which has been taking place in London.

The Illegal Wildlife Trade Declaration, signed by heads of state attending the conference, promised to increase action to tackle the illicit financial flows associated with wildlife trafficking and related corruption, and welcomed action to treat wildlife offences as predicate offences, including for money laundering crimes.

Born Free’s Head of Policy, Dr Mark Jones, who attended the conference, said: “It was good to see the UK hosting this event and persuading more than 80 countries to send representatives, including several heads of state and ministers, bringing political and public attention to this issue.

“But the lack of tangible, clear, time-bound, measurable commitments by attending governments within the Declaration leaves a feeling of an opportunity missed, and will make it hard to hold governments to account in spite of their fine words.”

A coalition of political leaders, conservationists and celebrities dedicated to defeating the illegal trade in ivory, including Born Free’s very own Youth Ambassador Bella Lack, make up the alliance.

In a powerful speech at the conference, Bella told delegates that the turning point to fight back against wildlife crime and protect the world’s wildlife had to be now, before it was too late. 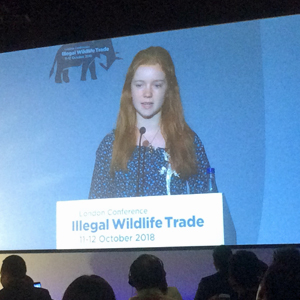