Today is International Orangutan Day. Born Free’s Emily Neil raises awareness of these incredible apes and the threats to their survival.

Long ago, the people of Borneo and Sumatra encountered a hairy, red ape swinging from branch to branch in the lush green Indonesian forests. Recognising its likeness with humans, they named it ‘orangutan,’ meaning ‘person of the forest.’ These gentle apes soon became an important part of many cultures, and the subject of local myths and legends. Today, some believe orangutans are reincarnations of humans, or that orangutans can become humans during the day, only returning to their true form after dark.

Orangutans were once widespread across southern China and mainland south east Asia, inhabiting dense, seemingly endless forests. Today, things are very different. They are now found only on the islands of Borneo and Sumatra, and their once rich, biodiverse jungles are in tatters. Habitat loss is the single biggest threat to orangutans, and activities like mining, logging, forest fires and palm oil development have destroyed an estimated 80% of orangutan habitat in the last 30 years. Illegal hunting is a secondary threat: the process of land clearing leaves orangutans exposed and vulnerable, and, since they are considered pests, some are shot and killed. Infants may become illegal pets if they survive the death of their mothers. As a result of these threats, orangutan numbers have severely declined. There are three species – Bornean, Sumatran, and the recently-discovered Tapanuli – all are listed as Critically Endangered on the International Union for Conservation of Nature’s Red List. 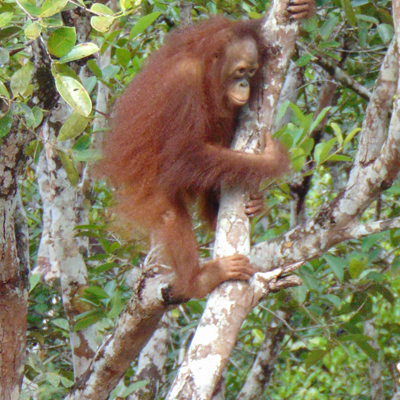 At the Born Free-supported Orangutan Foundation, dedicated conservationists have been protecting orangutans and their habitat in Central Kalimantan, Borneo, for over 20 years. They protect forests in Tanjung Puting National Park, Lamandau Wildlife Reserve and the Belantikan Arut region, by conducting daily foot patrols, constructing guard posts in strategic locations to deter illegal activities and responding to forest fires. In Lamandau Wildlife Reserve, they plant tens of thousands of fire-resistant tree seedlings in areas that were damaged by fires, as part of their Forest Restoration Programme. Slowly, the forest is regenerating and the natural ecosystem is being restored.

The Orangutan Foundation also rescues  injured or orphaned orangutans, releasing them when they’re ready into the Lamandau Wildlife Reserve. You may be familiar with our adoptable orangutan, Timtom: she was just nine months old when she was rescued from the illegal pet trade, and is now one of the most playful and mischievous orangutans in the foundation’s soft release programme. Timtom is slowly but surely learning the skills she will need to survive in the wild, such as how to climb trees, forage and build nests. Amazingly, half of the 600 orangutans in Lamandau were rescued and released by the Orangutan Foundation. This means the programme has created a viable population of Bornean orangutans, hugely helping the overall conservation of this Critically Endangered species.

On this International Orangutan Day, we at Born Free extend a heartfelt thank you to organisations like the Orangutan Foundation, who work tirelessly to protect these species, and to supporters like you, who ensure they can continue this vital work.