Seeing a spring hare sitting bolt upright or zig-zagging at speed across a field is a real treat. Sadly it is one that is becoming increasingly rare in the UK. Concerted action is urgently needed to protect these animals, not least from those who would shoot them for sport during their critical breeding season.

In Britain we’re lucky to be home for two species of hare – the brown hare, which has been resident since Roman times and is most commonly seen on arable farmland, and the mountain hare which prefers heathlands in Scotland and the North of England.

However, both have declined dramatically. There may have been as many as four million brown hares across the UK as recently as 1880. The most recent estimates, which themselves are 20 years old, suggest that hares now number as few as 800,000.

Britain’s hares are threatened by loss of habitat through changes to agricultural practices, predation (principally by foxes), and various infectious diseases including, most recently, Rabbit Haemorrhagic Disease Virus which appears to have jumped species and may have resulted in a recent spate of hare deaths. As if these challenges weren’t enough, 300,000 or more hares are shot each year on farmland and shooting estates, in the name of sport. 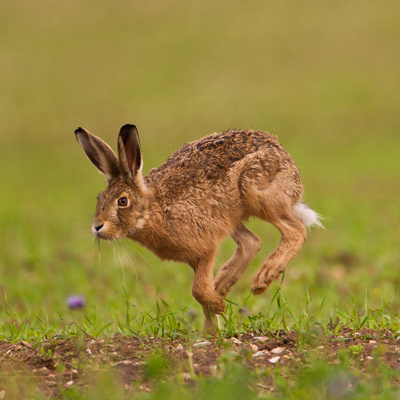 Across most of Europe, hares are protected against shooting and deliberate killing during their breeding season, which typically runs from February to September. Scotland introduced a close season in 2012 under the Wildlife and Natural Environment Act 2011 which makes it an offence to intentionally or recklessly kill, injure or take brown hares from February to September, and mountain hares from March to July.

However, in England and Wales hares enjoy no such legal protection. The Hares Preservation Act of 1892, which is still in force, only prohibits the sale of hares from March to July, but does nothing to prevent them being shot. Indeed most shoots take place in February when females are already pregnant or nursing dependent young.

The shooting of hares during the breeding season results in the death of dependent young through starvation or predation, and the loss of breeding females, with serious animal welfare and conservation implications.

Recognising the plight of hares, the Government classified both species as ‘Priority Species’ under the UK Biodiversity Action Plan which was published in 1994, and a Species Action Plan was created for the brown hare in 1995 which set a target of doubling spring numbers in Britain by 2010. However this target was never achieved, and although hares remain priority species under the UK Post-2010 Biodiversity Framework, without greater legal protection their future looks bleak.

Former Agriculture Minister George Eustice MP is planning to introduce a Private Members Bill to Parliament in 2019, repealing the outdated 1892 Act and replacing it with a prohibition of the killing or taking of hares during their breeding season.