WHY ELEPHANTS DON’T BELONG IN ZOOS

As part of our Elephant-Free UK campaign, Tricia Holford, Born Free’s Captive Animals Officer and Regional Co-ordinator, explains why the zoo is no place for an elephant

“If they're not going to be in Africa, what better place than here.” Milwaukee County Zoo’s PR Co-ordinator Jenny Diliberti said about its upgraded elephant enclosure, opened in the US in May 2019 to much fanfare. Built at a cost of $16.6m, this provides its elephants with a paltry 1.6 acres of outside space. The indoor area is 20,000 square feet, less than half an acre.

The size of this enclosure is not dissimilar to the elephant enclosures in some of our zoos in the UK – Belfast, Blackpool, Chester, Colchester, Paignton and Blair Drummond Safari Park – which vary in size from one to three acres. Other zoos in the UK have slightly bigger outdoor enclosures for elephants, but these are still little more than a postage stamp when compared with the tens of miles elephants will sometimes walk every day in the wild.

Size isn’t everything, but it is a big deal to elephants. They have physiologically and mentally evolved to live life on a very different scale. It is impossible to adequately cater for this in a captive situation. We fail elephants on so many levels when confining them in zoos. 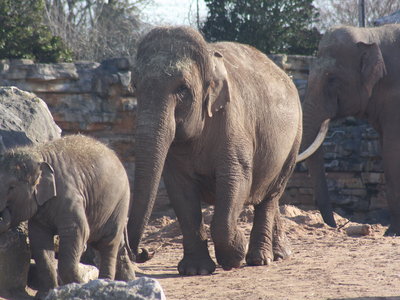 Take elephant society – their natural biology and behaviour is based on living within and as part of a closely-bonded matriarchal herd. Elephants are born into a world of caressing trunks and a protective forest of legs, their mother supported by their grandmother, sisters, aunts and cousins. The females will mostly remain in this caring extended family. The males, when they are young adults, will leave, maybe to live in bachelor groups or they will choose to spend time alone, associating with females to breed or to visit.

How different to the life of an elephant in a zoo. In zoos, their lives have been described as one of “pass the parcel” by our Co-Founder & Trustee Virginia McKenna OBE, to describe the swapping and transfer of animals between zoos, under the banner of breeding programmes. The stress and disruption it must cause to the individuals wrenched from their families or companions, and to those left behind, is incalculable. For elephants, with their close-knit society, it must be particularly painful.

Or Thi Ha Way. She has given birth to nine calves, only two of whom are still alive. Currently living at Chester Zoo, Thi Ha Way was caught from the wild in 1982. She killed her first calf shortly after birth, her second calf only survived a year, her third calf collapsed and died at 21 years old, her fourth calf is 18 years old but was sent to Budapest Zoo in Hungary, her fifth calf was stillborn in 2004, her sixth, seventh and eighth calves (born 2006, 2011, 2015) all died of Elephant Endotheliotropic Herpesvirus aged just two and three, her ninth calf, a male, was born in 2018 and is currently still alive. At Chester Zoo, Thi Ha Way has been seen repetitively swaying and head-bobbing in abnormal stereotypic behaviour.

These stories illustrate much of what we believe is wrong with keeping elephants in zoos: disease, human-designed societies, infant mortalities, stereotypic behaviour, poor breeding success and reduced life expectancy. Captive elephants are at risk of feeling the emotional and physical pain of these experiences.

Of course, elephants face many threats in the wild, including from poaching, hunting and human-wildlife conflict. However, captive breeding in zoos does not effectively contribute to the conservation of the species in the wild. For example, the African Elephant Specialist Group of the International Union for Conservation of Nature has stated that it “is concerned by the poor breeding success and low life expectancy of captive African elephants and does not see any contribution to the effective conservation of the species through captive breeding per se.”

Zoos simply do not offer real alternatives or solutions to the threats facing elephants in the wild, and subject elephants to a different kind of suffering.

The zoo is no place for elephants. Please help our campaign to bring about an Elephant-Free UK.