In July 2015, I’d been Born Free’s Press Officer for just two months. Still very much in my induction period, I was learning the ropes of wildlife conservation. But all that changed when, more than 8,000 miles away in Zimbabwe, an American dentist and trophy hunter called Walter Palmer killed a 13-year-old lion called Cecil.

Overnight, the world exploded. My phone rang off the hook for days. I fielded calls from media outlets all over the world, supplied comment and arranged dozens of TV and radio interviews for my colleagues. It was – and still is – Born Free’s busiest PR period, with our coverage alone reaching more than 200 million people.

So why did Cecil’s death cause such an outcry? After all, while we might abhor trophy hunting, the killing of a lion by a foreign hunter isn’t a particularly rare event. Cynics could argue it was because he died at a relatively quiet time for world news. However, Cecil was also monitored as part of a research programme and was a recognisable favourite with tourists because of his imposing presence and dark mane.

With a name and a personality, the public could relate to Cecil much more than the many anonymous wild animals who die at the hands of trophy hunters every day. 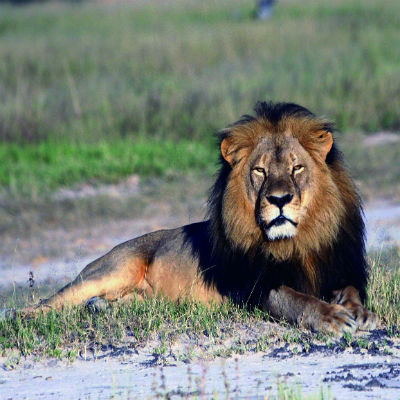 Cecil’s death opened the eyes of the world to the cruel sport of trophy hunting – a practice that, until then, many people may have thought had long been consigned to history. Cecil was deliberately lured away from the protected area he called home, and callously shot with a bow and arrow. Mortally wounded, he was tracked and only finally killed several hours later by a second arrow.

Not only was his death appallingly brutal, it was also pointless. Cecil died because one man wanted to mount his head on a wall – to end the life of an innocent wild animal just because he’d paid to do it. People rightly reacted with shock and revulsion. Stories about Cecil’s death reached nearly 12,000 a day and social media mentions peaked at nearly 90,000. His death showed just how unpopular and unacceptable trophy hunting is.

Four years on, there is still fierce opposition to trophy hunting. Earlier this year, we launched a petition with 38 Degrees calling for the UK to ban the import of hunting trophies from threatened species. It was signed by more than 210,000 people. Since Cecil’s death, similar petitions, campaigns and global annual marches have been backed and attended by hundreds of thousands of people worldwide.

Born Free is opposed to the killing of any animal for sport or pleasure and we strongly refute claims by trophy hunting proponents that their activities support conservation or local communities. That’s why we’ve launched our new campaign Ban trophy hunting.

Cecil the lion – and every animal killed by a trophy hunter – must not have died in vain. The world continues to hear Cecil’s roar and Born Free is determined, with your help, to end the barbaric sport of trophy hunting for good.