King is growing, he is curious, full of energy and very much intrigued by strangers. At the centre we have many strangers, from impala and warthog to humans, so he has plenty to keep him occupied.

When King arrived at Shamwari he was a bit apprehensive of the team but now he’s got used to his new home and surroundings. He’s quite active some mornings and we see him stalking his neighbours, Black and Jora. King has a healthy appetite and is growing quickly, even his mane is beginning to grow. In the afternoon he likes to spend some time on top of his platform or on top of his shelter. Visitors to our education centre don’t want to leave his sight, they say what a beautiful young boy he is and ask a lot of questions to find out more about him.

A few guests that recently visited Shamwari had followed King’s rescue and came all the way to South Africa just to see him, how cool is that! We are sometimes asked if King would be released into the wild. Having been bred in captivity, taken away from his mother at such a young age and hand reared, unfortunately, King would not survive in the wild. Luckily, we are able to provide King with the next best thing at Shamwari – where he lives in a spacious, safe and enriching environment, surrounded by the sights and sounds of Africa. 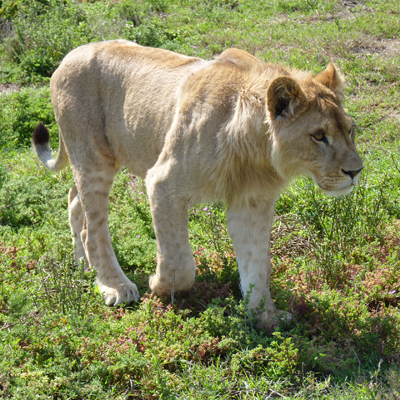 This trio are doing very well. With the temperatures changing and the early spring rains, they are playful and spending time in the open parts of their spacious enclosure. When they can’t be seen sleeping out in the open they will be lying somewhere in the middle of their enclosure amongst the dense natural vegetation.

Maggie and Sonja are so sweet and adorable. Whenever visitors see them, they fall in love, and that is so wonderful to witness. All of our big cats deserve this after their sad and traumatic starts in life. Every day when I do my rounds to check on the cats, it makes me feel good to see them thrive here and behaving like lions should do.

All three cats are so compatible and full of energy, the way it should be. They are also very good at eating and nothing goes to waste. Jerry tries his luck after the girls have finished their meal, he will try his very best to go in and see what they have left for him to nibble on. Boys will be boys! 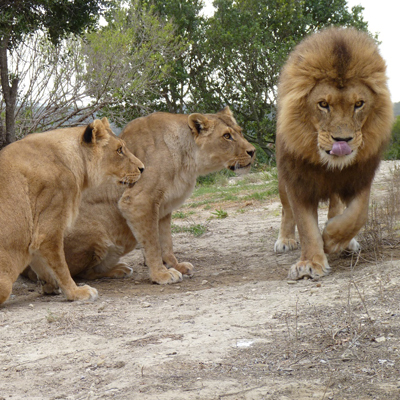 Nelson is doing well, he looks great and loves his food.

He has been keeping to himself lately. We still see him daily and he is a character that can’t be missed. By keeping to himself, I mean that during our guided tours the visitors do not always see him. We are fine with this, Nelson is doing what he never could do in his previous life, we understand how much his privacy means to him, as it does for all the cats at Shamwari. I tell you what, we are so lucky to have visitors that are so supportive and understanding when some of our big cats are not visible. It’s always a priceless moment for me when I hear supportive and kind words from our guests.

So, Nelson does what lions are good at – sleep – and he has one spot where he gets the morning, afternoon and evening sun, he loves this spot and most of the grass has gone because he spends so much time here. 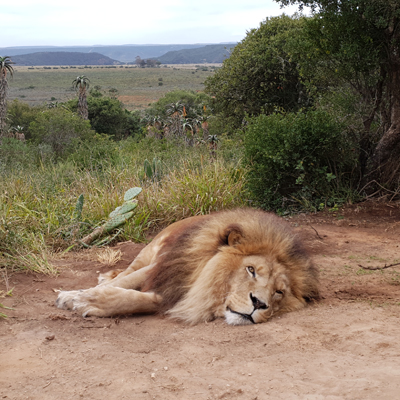