THINK FUR FOR FASHION IS UNETHICAL, OUTDATED AND CRUEL?

Born Free Needs Your Help To Persuade The British Government To Ban All Imports Of Fur And End Britain’s Cruel Fur Trade.

The fur trade is one of the most exploitative and cruel industries in the world today.

The global fur industry is worth more than £36 billion ($50 billion) and employs over a million people around the world from Europe to North America and China.

Despite all fur farming ending in Britain in 2003, over £75 million of fur is imported to this country every year, which helps maintain a global industry that causes immense suffering to both farmed and wild trapped animals.

Contact YOUR MP to support Early Day Motion 193, The Fur Trade in the UK.

Around half of the world's farmed fur is produced in the European Union with over 5,000 fur farms across 22 countries accounting for 50% of global production. The EU accounts for 63% of all mink production and 70% of fox fur production.

85% of the fur used in the fashion and clothing industry comes from animals raised on fur farms, where mink, foxes, chinchillas, raccoon dogs and lynx are locked up for their entire lives in mesh cages that just provide enough space to stand up and turn around but no opportunity for normal behaviour. This living environment is a constant source of pain and suffering. Numerous shocking investigations into fur farms in Europe and around the world have repeatedly documented extreme animal suffering including eye infections, untreated open wounds, missing legs, sores and infection from faces and urine, in addition to abnormal behaviour because of psychological damage. 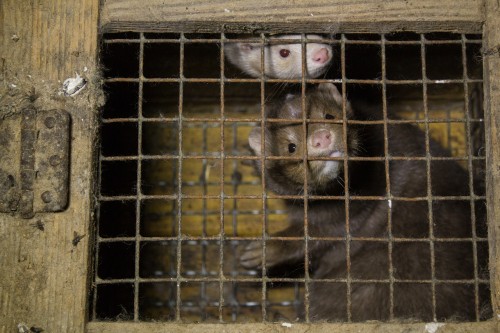 Around 15% of the global fur trade is supplied from the trapping of wild animals in the United States, Canada, and Russia. The most heavily traded types of wild fur from North American are beaver, coyote, ermine, red fox, martin, mink, and sable.

Trappers generally use baited and concealed traps usually at the start of winter when target animals have the thickest and highest quality coats. Traps are unarguably cruel. The three different types of traps in common use are leghold traps which capture animals by snapping closed and gripping their legs, conibear (or body gripping) traps which snap closed on the body and kill or seriously injure the animals, and snares consisting of wire loops that tighten around a limb, neck, or body of an animal.

Animals caught in traps may remain there for several days before starving or dying from exposure or injury. Snares can slowly strangle animals to death, and animals whose limbs are caught in leg hold traps may chew off their paws to escape and subsequently die from their injuries. 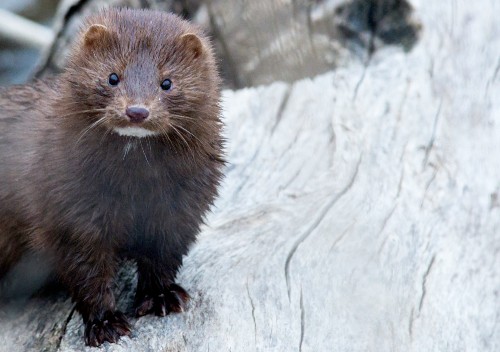 Because of their indiscriminate nature, traps can also be dangerous to non-target animals.  Trappers report that between three to ten non target animals are typically trapped for each intended victim. Wildlife trapping can also have a wider impact on species and habitats by pushing species towards extinction through over hunting, and by upsetting the delicate and complex balance of nature.

A YouGov poll commissioned by the Humane Society in the UK in 2020 found that 93% of the British population reject wearing real animal fur, and the majority (72%) support a complete ban on the sale of fur in the UK.

The poll also found that the most common words most people associate with a fashion brand selling fur are ‘unethical’ ‘outdated’, ‘cruel and out of touch’.

EU disease and safety experts stated in February 2021 that all fur farms in Europe are at high risk of becoming infected with COVID-19 and spreading the virus within the caged animal population and to farm workers. 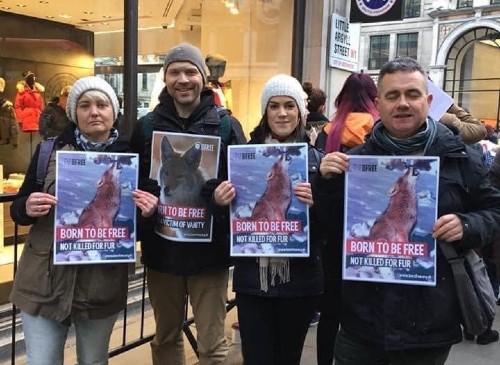 After a concerted campaign including Born Free protests in London, luxury clothier Canada Goose has just announced the company has gone fur-free

Mink are highly susceptible to COVID-19 which spreads rapidly in intensive fur farms due to the close proximity and stressed condition of so many animals, with humans being the most likely source of infection. Denmark, the world's largest exporter of mink fur, culled over 15 million minks in November 2020 due to COVID-19 outbreaks, after discovering a mutant strain of the virus that scientists feared might jeopardise the effectiveness of future vaccines.

The World Health Organisation has warned that the risk of COVID-19 spreading in fur farms remains high around the world.

In June 2021 Israel become the first nation in the world to implement a fur trade ban. In 2019 California became the first US state to enact a law banning the sale of fur products which takes effect in 2023.

The Government is currently undertaking a call for views on the future of the UK fur industry. Born Free, alongside other leading wildlife protection and animal welfare organisations is calling for Britain to follow the example of Israel and California and introduce a comprehensive fur trade ban.

The fur industry causes huge suffering for farmed and wild animals, is major source of environmental pollution, and risks spreading disease to humans. Bringing an end to this cruel trade would make Britain a true leader in animal welfare and protection in Europe and around the world.

Please contact YOUR MP to support the EDM (Early Day Motion)193, The Fur Trade in the UK. Find out how your MP’s contact details by clicking on the link below.