It deprives local people of their heritage, and the opportunity to benefit from non-destructive wildlife tourism, which generates far more money than trophy hunting ever can.”

Many jobs created by the hunting industry are poorly paid and insecure.

Born Free’s own in-depth investigations in Zambia reveal how money from hunting licence and concession fees due to local community groups, rarely if ever reaches them.

Isaac Banda, Executive Officer of Mnkhanya Community Resources Board (CRB) says: “Trophy hunting only serves for a few people on the top. Very few individuals benefit from trophy hunting and it does not create any change to the people that live with wildlife and natural resources, so let’s stop it.” 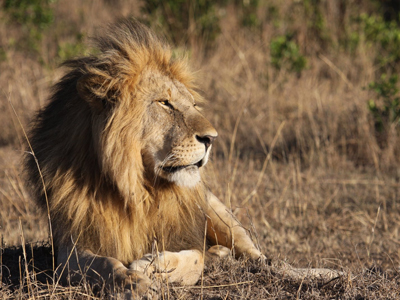 When funds are released, they fall hugely short of the amounts due, resulting in local salary arrears in the CRBs and great hardship and suffering. As a result, local people typically have an overwhelmingly negative attitude towards trophy hunting and accuse the Zambian government of withholding fees, corrupt practices and exploiting the wildlife with which they live for the benefit of others.

Jones added: “If wealthy people who can afford to trophy hunt really want to help conservation or benefit communities, they should resist their desire to kill and donate their money to organisations doing real conservation and community work.”

In Kenya, where trophy hunting is prohibited, money from non-destructive wildlife activities such as photographic tourism generates more than £1.6 billion each year from ecotourism and sustains millions of jobs. A far cry from Zambia’s current situation.