Born Free’s Ban trophy hunting campaign is busting the myths on this barbaric sport – including claims that by killing wild animals, trophy hunters are helping the local economy

It’s a much used mantra by trophy hunters – trophy hunting helps the local economy by creating lots of jobs, paying substantial fees to local communities and boosting tourism. But that’s a myth.

In 2009, a report published by the International Union for Conservation of Nature found the turnover for big game hunting in Africa represented just 0.06% of GDP for the 11 major African countries that allow trophy hunting. It also found land used for trophy hunting generated, on average, a mere US$1.1 per hectare.

“The economic results of big game hunting are low,” the report concluded.

“Hunting contributions to GDP and States' national budgets are insignificant, especially when considering the size of the areas concerned.” 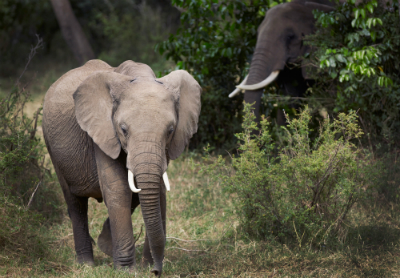 A more recent report, published in 2017, suggested that percentage has decreased further. The Lion’s Share found that “while overall tourism is between 2.8% and 5.1% of GDP… the total economic contribution of trophy hunters is at most about 0.03% of GDP”.

Trophy hunters may see the value in a dead animal, but they are worth far more alive according to the report Dead or Alive? Valuing an Elephant. It found that a live elephant could be worth as much as US$1.6m (£1.3m) to travel companies, airlines and local economies over its lifetime. That’s over 35 times more than the price a trophy hunting outfitter is currently marketing an elephant hunt for online.

Dr Mark Jones, Born Free’s Head of Policy, says: “Hunting proponents like to defend their grizzly activities by saying they are motivated by the financial and other benefits they claim accrue to local communities. However, the reality is very different. These people are clearly driven by the thrill of the kill and the chance to show off to their fellow hunters. The evidence shows that, in most cases, very little of the money trophy hunters pay out ever reaches local communities. If they are so concerned about local economic benefits, trophy hunters should resist their bloodlust and instead donate their money to a good community project. ”

That’s why we’re busting the myths in our latest campaign Ban trophy hunting. We oppose the killing of any animal for sport or pleasure and are calling for an end to trophy and canned hunting across the world. Find out how you can help and why Born Free believes trophy hunting does not bring significant benefits to conservation programmes or local communities.