TROPHY HUNTING: WHAT ARE THE ALTERNATIVES?

Born Free believes that trophy hunting is unethical and unsustainable, and that we should work with policy makers, land managers and local communities to find alternative approaches.

But what could they be?

Wildlife tourism is a vital income source across Africa, with recent studies showing that local communities benefit more from live animal tourism and safaris than trophy hunting. In fact, a 2019 study* found that viewing animals in their natural habitat contributed 4.4% of all direct tourism GDP last year. Wildlife tourism directly created over nine million jobs around the world and indirectly supported a further 21.8 million jobs globally. This is in contrast to hunting companies’ contribution to communities living in hunting areas which averaged just 3% of their revenue.

The benefits of restricting trophy hunting and encouraging wildlife tourism can be huge, as many countries which have taken these measures are now gaining reputations as wildlife havens. One example is Malawi – a country making great strides in wildlife conservation. 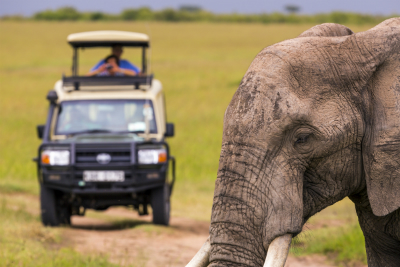 In 2017 the Malawian government passed a law to prohibit recreational and professional hunting of protected species. Exporting trophies is also illegal, and tough new punishments have been introduced for poaching wildlife or engaging in the illegal wildlife trade. These measures have contributed greatly to Malawi’s growing reputation as the ‘warm heart of Africa’ and the country is gaining popularity as a wildlife tourism destination.

Photographic safaris can be a positive alternative to trophy hunting. Shooting an animal with a camera, rather than a gun will not only save that animal’s life, but enable it to continue to generate funds through photographic tourism for years to come. A recent study found that a live elephant may be worth as much as US$1.6m over its lifetime through income from photographic tourism – many times the fee typically paid by a trophy hunter to shoot one.

Wildlife photography competitions like Born Free’s Shoot to Thrill actively encourage people to share their amazing photos of wild animals as they should be – in the wild.

Born Free’s Head of Policy Mark Jones notes: “Trophy hunting is a cruel relic of a colonial era that results in intense animal suffering and disruption of wildlife populations, while contributing little or nothing to local economies or wildlife conservation. It is also wracked by corruption and greed. However, if we are to end this heinous activity we must find alternative ways of managing land that benefits both wildlife and the local communities that live alongside it. Malawi is showing the way, as Kenya has also done through the creation of its Northern Rangeland Conservancies. Responsible ecotourism offers a much more acceptable and sustainable income-generation model, which combined with other funding strategies and with equitable distribution of the benefits, can go a long way to halting and ultimately reversing the devastating declines in wildlife populations we are seeing, and which trophy hunting and other destructive use models have utterly failed to tackle.”

Born Free is opposed to the killing of any animal for sport or pleasure and is against all forms of trophy hunting. There’s still time to donate to our Ban Trophy Hunting campaign. You can also enter our Shoot to Thrill wildlife photography competition and sign our petition.