Do you remember Elsa, the lioness rescued from a circus in Sardinia and now living at Animanatura Wild Sanctuary in Italy?

Thirteen-year-old Elsa peacefully enjoys life at Animanatura Wild Sanctuary, where she has been since she was rescued by Born Free and Italian animal welfare organisation Lega Anti Vivisezione from the poor conditions of a travelling circus in Sardinia aged around six years old.

Originally, Elsa’s home at the sanctuary was to be a temporary arrangement and we longed to take her to our Shamwari sanctuary in South Africa. But, by the time Elsa was officially given over to our care after a lengthy court case, it was clear she was very happy and settled in her large outdoor enclosure in Italy and we didn’t want to disturb her. A couple of years ago, Elsa was officially introduced to her long-term neighbour, a male rescued lion Madiba who, after some disinterest on his part, became her close companion.

Nowadays, Elsa is the dominant one of the pair but this is fine with Madiba, who has massively increased in confidence since he met Elsa in 2019. Elsa seems to have helped him get over his apprehension of the outside world – Madiba previously lived cooped up at another circus.

These days, both lions especially love to be outside. Despite having lots of space to explore, Elsa chooses to spend most of her day relaxing, as do lions in the wild. While she likes to be in one spot, she does travel to bathe in the shade of the olive trees in the enclosure, which give her natural cover from the heat of the sun.

Elsa is in great shape, both mentally and physically and, besides lying in her chosen spot in the sun or shade, she greatly enjoys playing with toys such as large balls, or pumpkins filled with interesting scents. She is provided with dietary enrichment which includes hanging meat for her to tackle, and hiding food for her to find, scattered throughout her enclosure. Thanks to your kind donations, her life today is worlds apart from when we first saw her lying on concrete in a rusty circus trailer.

Born Free’s Rescue and Care Officer, Flo Blackbourn, says “It’s wonderful to see Elsa doing so well after her poor start in life. Even nicer is that her happiness and confidence has allowed Madiba to recover from his own trauma. Together they make a lovely pair and our thanks to all Born Free supporters who have helped fund Elsa’s rescue and care.” 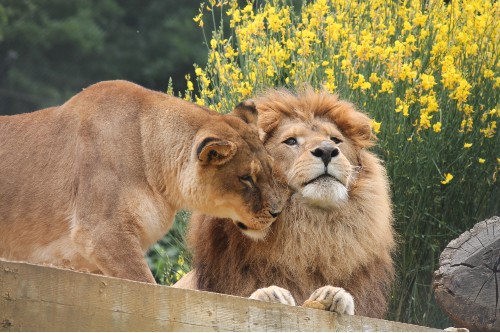 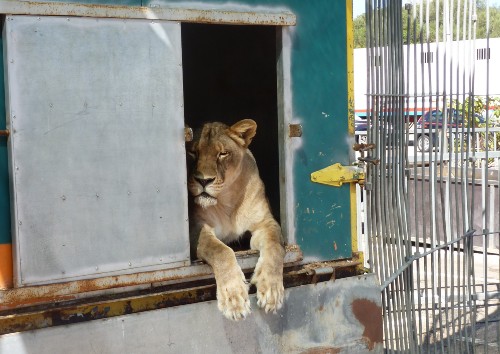