Springer is a wild orca who lives in the waters off Hanson Island in Canada’s Johnson Strait. She is monitored by the Born Free-supported Orcalab.

Springer was found swimming disorientated and alone near Seattle, USA, in January 2002 when she was just two years old. Luckily, she was identified by her unique calls and reunited with her wild family pod near Vancouver Island, Canada. She now has two calves of her own, born in 2013 and 2017.

Orcas are under threat – both in the wild and in captivity. In the wild, they are threatened by fishing and pollution. In captivity, they are exploited by the ‘entertainment’ industry.

Orcalab is the world’s longest field study of wild orca. Based in Canada, Orcalab has monitored the wild orca off British Colombia for more than 30 years. Born Free has supported the Orcalab team, headed by Dr Paul Spong, since 1994.

Springer was spotted by the team early this year. “As the start of the 2018 season unfolded, Springer returned to the area of her release, bringing her two little ones, Spirit (A104) and A116 (yet to be given a name),” explains Dr Spong. “For part of their visit, mother Springer ushered her little ones to the rubbing beaches where our remote surface and underwater cameras captured their passes over the shallow, pebbly shore. It was a heart-warming and beautiful moment.”

“Springer, bereft of her own mother at such an early age, is now all grown up, a caring mother of two, fulfilling her orca destiny. Springer’s story is truly an inspiration and represents the opportunity that all orcas deserve; to live wild and free,” he adds.

Help Orcalab and Born Free continue their work to monitor wild orca by adopting Springer and her calves today. 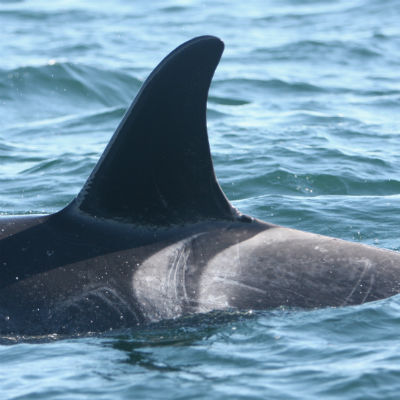