Ensuring a safer future for elephants and giraffes in Born Free’s heartland.

Kenya, the East African country that conjures up scenes of mass animal migrations, huge beasts in swollen numbers thundering across the vast untouched wilderness; the safari capital of the world.

For Born Free, Kenya also pulls our heartstrings, bringing to mind our raison d’être: the life and fate of Elsa of lion, who was released and eventually buried in Meru National Park, around 200 miles north-east of Nairobi. The park itself – although not one of Kenya’s most famous – is beautiful, described by Kenya Wildlife Service (KWS) as a “complete wilderness; brilliant on a magnificent scale”, featuring a mosaic of jungle, swamps, grasslands, waterfalls and rivers, and home to Africa’s Big Five, as well numerous other stunning mammals and birds.

Though to some extent it is true that ‘Africa’s giants’ – including elephants, giraffes, buffalos – abound here, partly drawn to the park’s abundant water, the situation is not as stable and secured as safari-goers might hope to believe. Following a tragic period in the 1980s and 90s when poachers were free to ravage the park’s wildlife, KWS and conservation groups together succeeded to restock and restore the park, and now a dedicated team of rangers protects the park’s rebounded wildlife.

However, even such protected areas designated for wildlife are facing extreme pressures as a result of a squeeze on resources. The local Kamba, Mbeere, Meru and Tharaka people are traditional agriculturalists, cultivating maize, beans, cabbage and fruits right up to the park’s west and south-west boundaries to meet their food and income needs. Areas to the east, south, and north of the park are inhabited mainly by Borana and Somali pastoralist communities that depend on livestock for their livelihoods. This exerts pressure on the park from all sides, with livestock incursions, opportunistic cultivation and bushmeat hunting occurring within the park boundaries. Bushmeat hunting is often carried out using snares – horrific tangles of wire designed to grab and tighten onto anything that’s unlucky enough to step into it.

Since the Covid-19 pandemic began, there has been a huge surge in illegal hunting of wildlife in Meru. Shockingly, this is one of the greatest threats to the magnificent giraffes here – an understated African giant, so familiar to all and yet often forgotten, now facing the risk of a silent extinction. With their elegant long legs, they all too easily get ensnared, injured, maimed and even killed as a result.

Africa’s giants require vast areas to roam in search of the resources they need – food, water, mates. This cannot always be provided within the confines of a designated park and animals regularly move beyond the boundaries, passing through villages and rubbing shoulders with local communities. 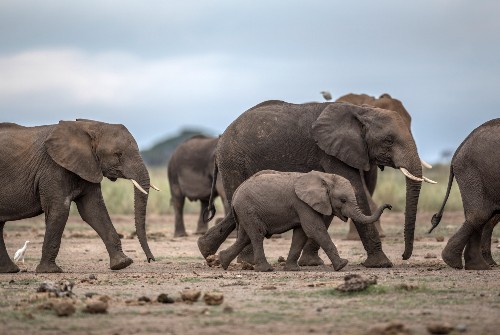 "Elephants can move hundreds of miles seasonally, and are suspected to disperse between Meru and the northern grazing lands." 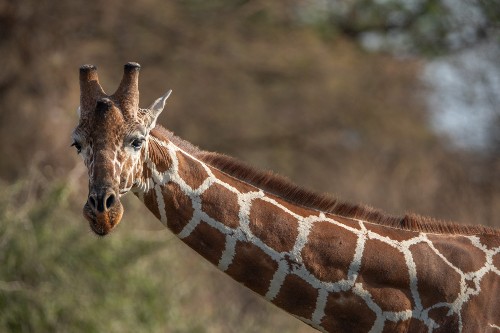 "With their elegant long legs, giraffes all too easily get ensnared, injured, maimed and even killed."

Elephants, for example, can move hundreds of miles seasonally, and are suspected to disperse between Meru and the northern grazing lands, a vast landscape stretching out north of the park. It is when passing through park buffer communities that troubles arise for elephants. Being natural herbivores, with a huge appetite, elephants browse on up to 150 kg of grasses, leaves, flowers and fruits daily, and it is no surprise that they will happily relish the nutritious crops that they find growing aplenty in farmers’ fields. In a bid to salvage their livelihoods, farmers will chase off crop-foraging elephants – sometimes using harmful methods – which can of course be mighty dangerous for the valiant farmer, as well as hugely traumatic and often deadly for the elephant foragers.

Hundreds of conflict events have been recorded each year around Meru National Park; both people and elephants have lost their lives as a result.

With the giants of Born Free’s heartlands at such risk, we cannot sit back and watch. Building on our existing lion conservation programme in Meru National Park, which has identified and monitored the resident prides since 2014, Born Free is launching ‘Saving Meru’s Giants’, in a brand new, carefully designed programme of activities aiming to tackle these threats to giraffes and elephants and with a vision of creating an environment for coexistence between people and Africa’s giants. “The solution may not be simple,” explains Newton Simiyu, our Project Lead, “but I draw my inspiration here, to find a balance between conserving these elephant and giraffe populations while at the same time allowing people to thrive”.

What’s more, you can help us achieve this! Your donation could be used to help our team on the ground buy and adapt beehives, that will be positioned strategically around crop fields, and interlinked with wires. Elephants have a natural aversion to bees and will flee if they get too close and disturb the ‘beehive fence’ causing the bees to swarm out. A compassionate, natural way to prevent crop foraging and a potential additional income generating activity for the farmers – honey production! Your donation could help train, equip and support our brand new ‘Twiga Team’, comprising women and men from the local communities, our staff, and KWS rangers, who will patrol and remove snares within the park, securing the integrity of crucial giraffe habitat.

In doing so, we aim to secure a safe future for Africa’s giants, in this beautiful landscape, Born Free’s heartland.