A SAFE HAVEN FOR GELADAS

Born Free’s Rescue Centre In Ethiopia Is Home To 19 Gelada Baboons And Dozens Of Other Primates.

Found only in Ethiopia’s high mountain meadows, geladas are also known as bleeding-heart monkeys – you can see why! Strong and large (males can grow to 75cm), they are the only grass-eating species of monkey and spend more time on the ground than any primate except for people. Short stumpy fingers pull up grass and herbs, which make up to 90% of their diet, plus flowers, roots, fruits, thistles and the occasional insect.

In the wild geladas live in habitat up to 4,400m above sea level and are adept climbers, huddling together on cliff ledges to sleep – safe from predators including leopards and hyenas. Active during the day (diurnal), at sunrise they climb up from the cliff faces onto grasslands to feed and socialise. They live in vast herds with as many as 1,200 in a group and communicate with a complex language of cries, barks and gestures.

“Our Ensessa Kotteh centre rescues geladas and other primates from being kept illegally as pet, or those found injured or orphaned,” explains Born Free’s acting Head of Rescue & Care Maggie Balaskas. “These primates are cared for and, when possible, rehabilitated for release or given the best possible lifetime care in spacious enclosures filled with beautiful trees and bushes. Sadly, gelada are often targeted for the wildlife trade and kept illegally as pets in Ethiopia. When a rescued individual arrives at Ensessa Kotteh they may have never lived with another gelada and have no idea how to interactive. But, after very gradual and careful introductions, the gelada start to come out of their shell and thrive once they have the company of others. It’s a joy to see! But caring for these inquisitive animals is only possible with your generous support.”

Listed as ‘Least Concern’ by the International Union for the Conservation of Nature, there are around 200,000 geladas in the wild, but this is less than half the population in the 1970s. Their grassland habitat is under threat from agriculture, while gelada can also be shot by farmers wanting to protect their crops.

HELP US PROVIDE A SAFE HAVEN FOR ALL WILDLIFE 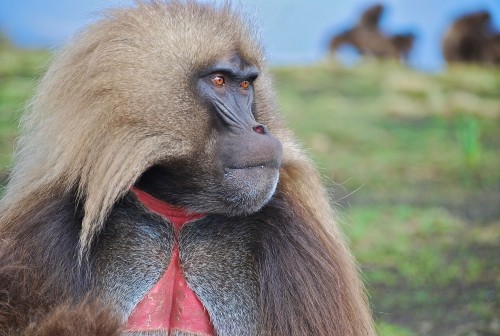