Last week, we embarked on a desnaring mission along the western boundary of Meru National Park.  After combing through the thick bushes and shrub in the triangle area along Murera River, we recovered five wire snares.  As we removed these snares, we also noted scattered patches of bare land which is an indicator of intensive livestock grazing in the area.  The short rains for last year failed, exacerbating an already severe drought situation in these arid and semi-arid lands. When this happens, the neighbouring pastoralist communities illegally drive their livestock into the Parks and other protected areas for survival.

In Kindani around areas of Kiolu, a hotspot for snares, we retrieved 16 wires. We did not see much of wild animal activities here, which meant that most of them have shifted north-west to the ‘high use areas’ - the extension of the Rhino Sanctuary, Murera and Mulika.

Wire snares are the popular means of poaching along the Park’s western boundary. Poachers cut fence lines and place them strategically around areas that wild animals frequent - along tracks and near watering points.

Our approach is two-pronged – to physically remove the snares and also conduct outreach and awareness missions for the communities.

So far, we have removed more than 1700 snares and conducted tens of outreach missions since 2015. 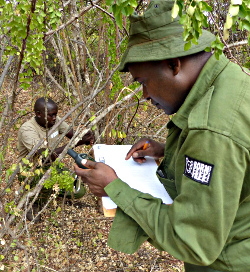