IN PURSUIT OF LIONS

Loud sniffs and snorts from hippos filled the air as we pitched our tents along River Rojawero, 30 kilometres to the south of Meru National Park - an expansive wilderness with less wildlife activities in comparison to the north. The cool breeze from the flowing river was the relief we needed from the sun that was blazing at 32C. Little did we know that night temperatures would dip to a low of 15C.

Huge numbers of wild animals are concentrated in the open grasslands and bushes to the north and west stretching into the Rhino Sanctuary. The southern part has an expanse of thick vegetation cover, with few access roads and low wild animal numbers.

Regular lion monitoring sessions are conducted in the north and western part of Meru National Park. The south is relatively unknown. The Meru Lion and Other Large Carnivores Census Report - conducted by Kenya Wildlife Service, Born Free and other partners in February 2016 - revealed the existence of some lions prowling this area, especially along River Rojawero, on the border of Bisanadi National Reserve and Meru Park, down to George Adamson's Bridge.

Our camping expedition was a fact-finding mission to ascertain the existence of these iconic species. We also wanted to add to our data on lions in the whole park, as well as scouting for individuals to collar for ease of monitoring. 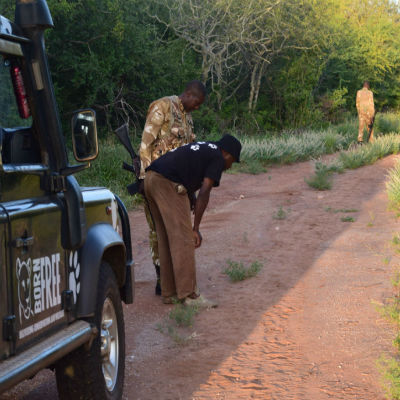 It is important for Born Free and our partners to understand any human-lion interaction around this area because there are incidences of livestock incursions during the dry seasons, and because it borders the Bisanadi Reserve where there are many interactions between local communities and wildlife.

Equipped with food, water and fuel, our daily routine for the three days was to leave the camp before sunrise, take a break when the sun was high and hot, continue the search in the late afternoon, and arrive back at camp just as darkness covered the area. We drove along and off the roads in search of lions or their spoors. We wanted to record actual sightings, reported sightings, lion footprints along the road, carcasses from possible lion kills and night-time lion roars. This is key to information gathering.

Driving along River Rojawero was the most challenging moment. With the rains still falling upstream, the river was full - its muddy water splashing on rocks and twigs as it snaked its course downstream towards Tana River. However, Rojawero’s tributaries have dried up since last year’s drought, and we were forced to manoeuvre along dilapidated roads, dry sand beds and deep rills with fallen palm trees.

Despite not making actual lion sightings, we recorded a number of footprints along Rojawero. We also saw a good number of dik-dik, lesser kudu and gerenuks.

This is just the start of further lion searching expeditions to come. We need to dedicate more time and effort to this area to help us understand the ‘peace and quiet’ of the south and the wildlife population that roams there.