Born Free Founder and Trustee, Virginia McKenna OBE, congratulated newly qualified Metropolitan Police Dog handlers and their dogs, as they graduated from the Training Establishment in Keston, Kent. In a week where the future of the UK’s domestic ivory market was debated in Parliament, Virginia was keen to see first-hand how the Metropolitan Police is piloting new training techniques to crack down on the illegal wildlife trade.

Born Free had assisted the Dog Training Establishment by helping them source ivory and rhino horn samples which have been used in the training. The hope is that the specially trained sniffer dogs will provide the police with the ability to enforce the law by detecting and seizing trafficked wildlife products and bringing perpetrators to justice.

Illegal trade in wildlife is estimated to be worth as much as US$23 billion per annum*, and is co-ordinated by organised crime networks.  From 2009 to 2014, 40% of UK customs seizures were ivory items, and with tens of thousands of  elephants being killed each year for their ivory, and at least 6,000 African rhinos slaughtered by poachers since 2008, time is running out for these and many other  iconic creatures.

Virginia, who founded international wildlife charity Born Free Foundation with husband Bill Travers and son Will, after starring in the 1966 film Born Free, was honoured to be the VIP guest at the ‘passing out’ ceremony at the Metropolitan Police Dog Training Establishment.  She was escorted to Keston by Born Free’s Associate Director of EU Compliance and Tourism, Daniel Turner, in a brand new Land Rover Discovery, which was donated to the charity by Land Rover with money raised from their recent retailer fundraising initiative, and will support investigative and outreach work in the U.K.

Following a tour of the facilities, they met some of the graduates and learnt how the dogs are trained to detect contraband, including explosives, drugs and wildlife products such as elephant ivory and rhino horn. Virginia was then delighted to present certificates to the graduates, in the presence of senior police officers and many of their family and friends, and spoke of the vital role these specialist police dogs will play in the future.

“Just sometimes you meet people who  inspire you. This happened to me today. To watch the graduate dog handlers and their relationship with their dogs was extraordinary. The mutual affection was tangible and their success in catching criminals is well documented. And then two special dogs and their handlers who have been trained to sniff out illegal ivory  and rhino horn .  A brilliant and urgent development of this special skill. I really hope this technique will spread across the country, and further afield. There is not a moment to lose. Dogs working for other animals is quite special. And humbling.”

“Wildlife trafficking is devastating literally hundreds of species, from elephants, rhinos and tigers to less well known but equally important animals such as pangolins, reptiles and amphibians. As well as impacting wildlife, the trafficking disrupts local communities and undermines the rule of law. This global crisis demands a global response. The UK is a transit point and destination for many illegal wildlife products, and our excellent but overstretched law enforcement authorities need every tool in the box to effectively police the trafficking.

“The training of sniffer dogs to detect illegal wildlife products in London is a real step forward, and has already enabled the Metropolitan police to seize a stash of illegal ivory. Born Free congratulates the police team involved. We will continue to work with UK policy-makers, judicial authorities, enforcement bodies and the wider public to help ensure that wildlife trafficking is given the high priority it deserves, and that the UK plays its full part in combatting this scourge both here at home and at an international level.” 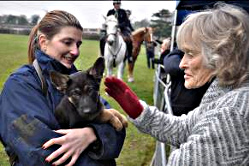