We support PETA's petition calling for the replacement of real bear skin hats in the British Army with faux fur alternatives.

The UK Ministry of Defence has for many years been procuring fur pelts from black bears killed in Canada, for the production of ceremonial hats worn by the Coldstream Guards in the British Army.

Black bears are killed in Canada under population control measures and as a result of human wildlife conflict. Hunting regulations are set at a provincial level in Canada with hunting tags being issued to licenced hunters according to seasonal quotas in each province.

Bears are baited, ensnared and shot by hunters under these licences. Many bears do not die immediately, enduring a slow death from blood loss or starvation. Some may be mothers that have emerged from hibernation with nursing cubs, which are targeted by hunters when their fur is thickest and most prized by clothing companies.

Many of the bear skins from shot bears are sold through auction houses for the clothing industry. A number of these bear skins are procured by the Ministry of Defence on an annual basis for the production of ceremonial hats for the Coldstream Guards.

It currently takes the fur of at least one bear to make a single hat for the Coldstream Guards.

This issue was brought to the attention of the public over a decade ago by People for the Ethical Treatment of Animals (PETA). During this time PETA has worked with world-renowned faux fur manufacturer ECOPEL and designer Stella McCartney to create the first faux bear hat for the Coldstream Guards, which is visually indistinguishable from the real thing.

This faux fur hat as been offered to the Ministry of Defence free of charge over the next decade, which will be a significant saving for the tax payer.

However, the Ministry of Defence has consistently refused to adopt the faux fur alternative hat for the Coldstream Guards on the basis that is fails to meets the criteria it sets for the garment. 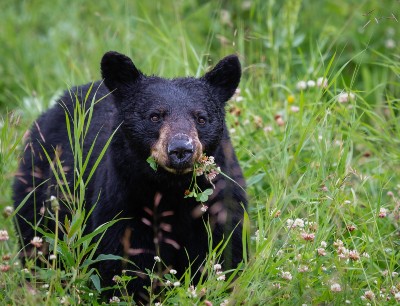 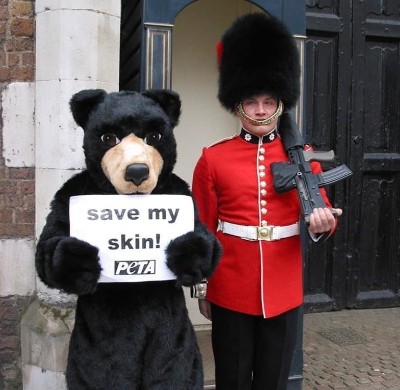 PETA has now relaunched its campaign calling for an end to the use of bear fur hats in the British Army, a campaign that has Born Free’s support.

The renewed focus on use of bear fur hats by the British Army comes at a time when the Government is moving forward with plans to introduce legislation to ban the import of wild animal trophies to the UK. American black bears are listed under the UK's Wildlife Trade Regulations and as such the importation of their pelts by hunters will be illegal under the proposed new legislation.

The Government is also indicating that it will consider implementing a ban on the import, manufacture or sale of fur products in the UK from both wild and farmed animals.

Born Free strongly supports a ban of the import of wild animal trophies and an end to the UK fur trade and believes this should also finally result in the Ministry of Defence halting the use of bear fur hats for the British Army.

Responding to the relaunch of the campaign Dominic Dyer Policy Advisor at Born Free said:
"The Ministry of Defence has spent over £1 million in the last seven years on bear fur hats for the British Army which have cost the lives of hundreds of black bears. The vast majority of the British public oppose killing animals for their fur, and the continued use of bear fur undermines the governments commitment to end the import of wild animal trophies and move towards a fur free Britain. Its time the Ministry of Defence followed the humane actions of Her Majesty the Queen (who no longer wears fur) by replacing all bear fur hats for the Coldstream Guards with the cruelty free faux fur alternative. This is better for bears and tax payers."

How can Born Free supporters get behind the campaign

A UK Government Petition has been set up by singer Alesha Dixon calling for the replacement of real bear skin hats in the British Army with faux fur alternatives, which you can sign and share via the link below.