Mugaruka and Chimanuka are a pair of rare eastern lowland gorillas – also known as Grauer’s gorillas – living in the mountain rainforests of Kahuzi-Biega National Park, a vast 6,000km2 area in the eastern Democratic Republic of Congo (DRC). The park is a UNESCO World Heritage Site, inscribed in 1980 for its unique biodiversity of rainforest habitat and is home to one of the last populations of eastern lowland gorillas.

Since 2001, Born Free has supported the dedicated and brave rangers of Kahuzi-Biega National Park, who risk their lives to keep these gorillas safe from poachers. The rangers conduct daily monitoring of 13 gorilla family groups in the Tshivanga Highlands sector of the park, observing their health and behaviour.

Born Free also supports the award-winning local conservation NGO, Pole Pole Foundation, who works with local communities to improve their livelihood and ensure the long-term conservation of the gorillas within the park.

One of our closest relatives, the gorilla is the biggest of the great apes. They might be powerful, but gorillas are intelligent, peaceful vegetarians, who live in close-knit family groups. Unfortunately, they are under terrible threat – their forest homes are destroyed by logging companies which opens up habitats to poachers, they are killed for meat or ‘curios,’ and their terrified infants sold as pets.

Gorilla-viewing tourism began to generate important revenue for Kahuzi-Biega back in the 1970s and 1980s, but during the 1990s DRC became a warzone and much of its forest destroyed by mining for coltan, a product used in many electrical components such as mobile phones. Sadly, conflict with miners and militia still hinder progress today. It is thought that less than 3,800 eastern lowland gorillas remain, a 77% loss since 1994.

Happily, Kahuzi-Biega’s critically endangered eastern lowland gorillas increased from 151 to 160 this year in the Tshivanga Highlands and all 13 families are healthy and doing well which is great news. The lowlands sector of the park also supports Grauer’s gorilla. However, due to the presence of militia groups, until very recently little was known about these gorillas. Currently, surveys and protection efforts are focused on this area.

July was fruiting season and families often come into contact with each other as they search for ripe fruits to eat. This can lead to disagreements and this year two silverbacks, Chimanuka and his eldest son Bonane, had an aggressive interaction. Chimanuka, now 28-years-old, proved to be the more powerful of the two. Bonane was injured in the fight but fortunately his wounds healed quickly.

Mugaruka who lost a hand in a poacher’s snare, and was unable to defend a family, mostly lives alone and avoids contact with younger males who may injure him. Our ape expert Ian Redmond says; “the gorilla rangers tell me ‘the disabled one’ as they call him, is doing fine, with no quarrels with other silverbacks.”

Dr Liz Greengrass, Born Free’s Head of Conservation, says: “Mugaruka sometimes forages in communal fields, he doesn’t attack farmers or destroy crops, but likes to snack on the tasty exotic herbs. Fortunately the local community is excited to help monitor and protect him.”

Rangers recently discovered a baby gorilla trapped in a snare during one of their patrols. The baby’s family tried to cut the snare from the tree but it remained tightly wound around his wrist, cutting into the skin. Thankfully vets were able to successfully treat the wound and he can once again use his hand to walk and grip.

“Eastern lowland gorillas were recently classed as ‘Critically Endangered’. This kind of gorilla has declined by three-quarters in the past 20 years and it is vital we do everything we can to keep them safe. Your adoption is so important and much appreciated!” says Ian Redmond. 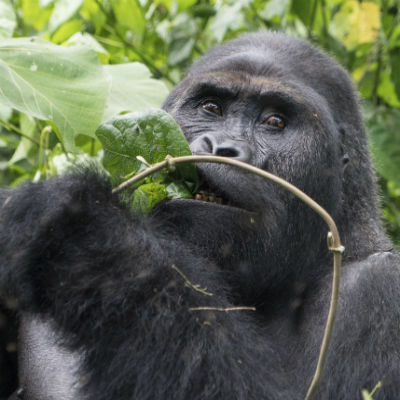 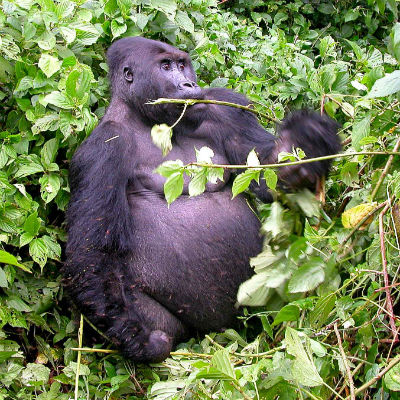