There’s been a lion cub boom in Meru National Park! Mulika, G-Coy and Elsa’s prides have so far been spotted with three new cubs each.

As we were conducting our regular lion monitoring session, we stumbled upon two Mulika lionesses near the Hippo pool, to the north east of Elsa’s Kopje in the centre of the park. We had last spotted these two lionesses in April. One of the lionesses was Silver Eye - one of the well-known lionesses of Mulika pride. Silver Eye’s companion was pregnant then and therefore must be the mother of the three cubs. The cubs are healthy, playful and full of life.

Most of the time, Silver Eye has been found with the G-Coy pride and other times with the Nairobi Girls pride. But she must have kept her pregnant sister company and now helps look after the cubs.

At the beginning of the year, we had spotted one of the Mulika lionesses with Simon, the male lion that was ousted from Mulika pride by two younger males last October. The next time we saw Simon, he was on honeymoon with the Mulika female. We have yet to confirm if the three cubs are Simon’s or if they were sired by one of the two younger males.

The G-Coy pride also has three cubs aged about one-and-a-half months old. The pride has four females and one male. The male has disappeared from the pride and the lionesses have divided into two pairs. One of the pairs was sighted with the cubs. The pride intermittently separates and gangs up again.

We also chanced upon an unknown pride of five lions (an alpha male, two adults female and two cubs). The male and one lioness were mating while the other female, the mother of the cubs, was roaming within Mugwangho Plain, which is to the east of Elsa’s Kopje.

We have also received a report from Elsa’s Kopje Lodge that Elsa's pride, one of the oldest known prides in Meru, has been spotted with three cubs. The cubs are just over a month old.

OUR WORK IN MERU 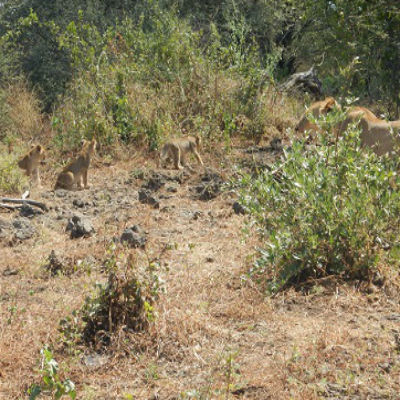